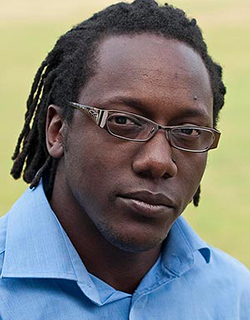 ONE of Africa’s best known and most courageous and controversial cricketers Henry Olonga will be the guest speaker at Malmesbury Cricket Club Annual Dinner and Dance on Friday.
Olonga, 39, played 25 Test matches for Zimbabwe after becoming both the first black player and the youngest person to represent his country at Test cricket in 1995.
He also played 41 one day internationals for Zimbabwe before his international career came to an abrupt halt in dramatic circumstances during the 2003 World Cup.
He and team-mate Andy Flower famously wore black armbands during match to “mourn the death of democracy” in Zimbabwe.
Death threats forced him to live in exile in England and he is now pursuing a career as a cricket commentator and entertainer.
Club spokesman Ray Sanderson, a former Mayor of Malmesbury – a market town in the English county of Wiltshire, said: “We are absolutely delighted to have a speaker of Henry Olonga’s calibre at our annual dinner and dance.
“It should be a fantastic evening.”
The black tie event, which will include music from the band Night Shade, an auction and a raffle, takes place at Malmesbury Town Hall on Friday.Advertisement