FIRE broke out at the Pomona dumpsite in Harare Monday and destroyed 30% of the waste which was supposed to be recycled into energy.

The site is at the centre of a row between the government and the opposition controlled Harare City Council over a controversial multi-million-dollar waste to energy contract awarded to a foreign whose local representative is linked to President Emmerson Mnangagwa‘s firm.

Local government minister July Moyo is insisting the deal will go ahead while the city council says it has been cancelled.

Netherlands registered Geo Pomona Waste Management Pvt Ltd, which was given the mega contract, said the fire was a deliberate scheme meant to sabotage the project.

“The origins of the fire are yet to be established and investigations are underway to establish whether it was a natural fire or was a product of saboteurs of the project,” the company said in a statement.

“Indications, presently, point towards some deliberate scheme by some third hand as the fire erupted in various but distant spots simultaneously. 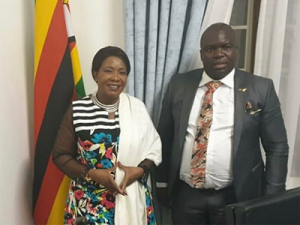 “The fire erupted around 1200hrs in the afternoon and we made all efforts to contain it. We point out that about thirty percent (30%) of the dumpsite was engulfed,” the company said in a statement.

The company also said they managed to put off the fire and had put in place sufficient measures to safeguard the dumpsite from similar incidents going forward.

This comes at a time when there have been serious clashes between the government and Harare City Council over the Pomona waste-to-energy deal.

Recently Harare Mayor Jacob Mafume cancelled the controversial deal at the same time the government insists that the project is ongoing.

Under the widely condemned US$344 million deal which was initiated by government, Harare’s council was supposed to hand over its Pomona Dumpsite to Georgenix for free for the period of 30 years.

Council and was also obligated to pay US$40,000 per day to dump waste it has collected at its own cost for the next 30 years at the same dumpsite.