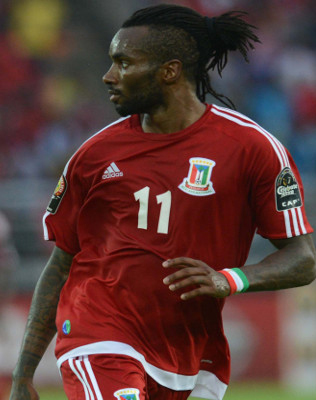 EQUATORIAL Guinea clinched a place in the semi-final of the African Cup of Nations for the first time in their history after a dramatic 2-1 victory over Tunisia.
The hosts were on the verge of heading out of the competition when they were awarded a controversial penalty three minutes into injury-time which Javier Balboa coolly slotted home to send the game into extra-time. Ahmed Akaichi had previously given Tunisia a lead on 70 minutes.
The drama continued in extra-time when a remarkable free-kick from Balboa curled around the wall and into the top corner to give Equatorial Guinea the lead.
Referee Rajindraparsad Seechurn was escorted from the pitch after the final whistle.
As the hosts celebrated, fist fights started between the rival players and the coaching staff.
“In my 15 years as a player and 30 as coach I’ve never seen anything like it,” Tunisia coach George Leekens told reporters.
“Today’s result was forced. The referee made a huge error and we did not deserve that.”
Tunisia – who have not tasted success in the competition since 2004 – had no response, and exit at the quarter-final stage despite ranking 96 places higher than their opponents.
Meanwhile, the dream lives on for Equatorial Guinea who will now play either Ghana or Guinea in the semi-finals on Thursday.

KEY STATS
Equatorial Guinea reach the Afcon semi-finals for the first time in their history, going one better than they did in 2012 when they were knocked out in the last eight by Ivory Coast.
TALKING POINT
Equatorial Guinea’s dream lives on – What looked a dull and boring game sprung into life at 70 minutes when Tunisia took the lead. However, what followed had to be seen to be believed. A soft penalty was given to Equatorial Guinea and the hosts took full advantage, scoring level through Javier Balboa, before the same player produced an outstanding effort from a free-kick to seal the game in extra-time.
MAN OF THE MATCH
Javier Balboa (Equatorial Guinea) – Who else? With the hopes and dreams of a nation on his shoulders, he stepped up so coolly to slot the penalty home. If that wasn’t good enough, Balboa curled home the winner with a free-kick good enough to win any contest.Advertisement