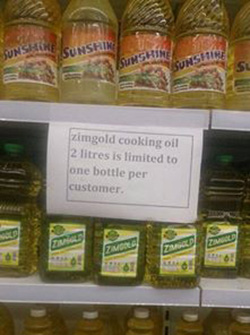 YESTERDAY, my brother forwarded a message on the family WhatsApp group warning us about the imminent shortage of cooking oil in major retail outlets in Zimbabwe. The message included a grim reminder of the 2008 food crisis and a recommendation to start hoarding while supplies last. Today he confirmed that several stores were low on this basic food item.
On the surface, this sounds like good advice to friends and family.  In a country where most people do not trust the national print and electronic media, social media has stepped in to fill the gap of market intelligence.
Most readers of this article are probably wondering about the validity of these claims. Is Zimbabwe really running out of cooking oil? The answer is YES. There will be a short-term shortage of cooking oil in Zimbabwe.
In economics, there is a concept called self-fulfilling prophecy.  Simply defined, it is a prediction that causes itself to become true. All that is required for this phenomenon to apply is a positive feedback between belief and behavior.
In the case of cooking oil in Zimbabwe, social media spreads the alarm that retail outlets are running out of cooking oil. Consumers respond by running to the supermarkets to stock up as much cooking oil as they can afford. As retail outlets start running out of stock, some of them start limiting the quantities that each customer can purchase and/or increasing the price.  By then, a positive feedback loop is established and it gets stronger with each cycle of speculation. The fear of the shortage becomes the main driver of the shortage. The small size of our economy, coupled with jittery consumers makes this all too common in Zimbabwe.
Note that the reasoning above has nothing to do with the basis of the original claim. Indeed, that WhatsApp message could have originated from a teenager playing pranks, an unscrupulous business person trying to clear excess inventory, or a keen observer of retail outlets –  anyone.  All that matters is that enough people believe in it and are willing to act on it.
The good news is that this shortage is likely to be a short-term phenomenon. My prediction is that these shortages will play out for two-to-three weeks before everything goes back to normal. The basis of my reasoning is that nothing has changed about the fundamental laws of supply and demand for cooking oil in the country.Advertisement

On the demand side, the consumption of cooking oil in Zimbabwe has not increased. As for supply, much of the cooking oil sold in Zimbabwe is imported from South Africa. There is no shortage of cooking oil in South Africa and there are no changes to the import policy.  The shortages will be driven primarily by supply logistics (e.g., product procurement and transportation) that cannot respond quickly enough to meet such unanticipated shortages.  Within a few weeks, suppliers will export more cooking oil to Zimbabwe and things will get back to normal.
Unfortunately, it is the most vulnerable members of our society that pay the price of such market games. Most Zimbabweans are struggling to make ends meet due to the weak economy and high levels of unemployment. When someone plays speculative games with markets for basic foods, middlemen step in to profit.
I urge fellow Zimbabweans to remain calm and refrain from forwarding such speculation on basic food items. As long as Zimbabwe stays with the US dollar as the main currency, there will be no shortages of food items in retail stores.  South African suppliers are more than happy to earn treasured US dollars by exporting to their northern neighbour.
Dr. Edward Mabaya is an agricultural economist and Associate Director of the Cornell International Institute for Food, Agriculture & Development. He is a 2016 Aspen Institute New Voices Fellow. Follow him on Twitter at @EdMabaya.