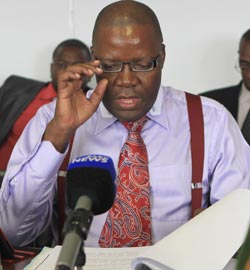 THE post-independence generation does not know the sound of drums of war; or the echoes of marauding helicopters vibrate in our ears. However, independence, for us, only means the battle ground had been shifted not cleared.
As the then Prime Minister of Zimbabwe said in 1980; we are born with the sole mandate of beating our forefathers’ “swords into ploughshares”; barrels into nuts and bolts so that “we can attend to the problems of developing our economy and our society.” The current generation’s fight is to keep the books balancing and machines cranking the night.
Many other countries went through the same struggles as we did. A big difference has always been that our yester-year liberators decided to turn their war-torn hands into typing fingers. For sure, after dismantling the white colonial regime, they felt they had also gained the freedom to suspend the rules of economics.
Despite all the economic free-fall we experienced in the past few decades, we suddenly realised remarkable growth in the period 2009-2012 when Tendai Biti was the Minister of Finance.
As Finance Minister, he rebuilt a ruined economy by putting back one brick each on top of the other and one tile back each after the other. Despite scepticism about Biti’s knowledge of finance and economics, he showed that a fundamental tenet of managing national finance and economics is discipline, attributes he already has, being a distinguished lawyer.
The simple lesson Zanu PF should have learnt from the Government of National Unity is that managing national finance and economics is an exercise that demands hard work plus due diligence minus populism. If you are not prepared to do things right and play by the rules you cannot balance the books. This is also why, by just stretching his left hand to reach for the national purse, Minister Chinamasa scared away all the savings Biti had painstakingly, coin after coin, dropped into the empty coffer.
The economic stability and growth enjoyed during the GNU did not only benefit those in the opposition and the unaffiliated but; equally so, the Zanu PF elite which by then had realised that a hungry population is more dangerous than an armed battalion.
We are back again where we were. Why should Zanu PF again be dragged to the national convergence table? Are there only visually impaired men and women in Zanu PF who cannot see that the economy requires unity of purpose and national cohesion?Advertisement

Why does the President feel comfortable to recycle proven failures than call back Biti to manage the finances? Which other Minister in the history of Zimbabwe has proved trustworthy with finances? Who else remained determined and focused in the face relentless pressure than Biti did?
Of course, he can be criticised for what some describe as his “arrogant” attitude, but the man must be given his respect for converting that “arrogance” into bread and butter. Unless we are not an honest generation, we cannot deny that for once we wiped off the tears of abject hunger; only because we didn’t know that those better days were not with us for long.
The President should not be shy to call in any Zimbabwean for national duty. Of course it’s embarrassing for an egoistic President, but that is true patriotism. Perhaps much better patriotism than “rambai makashinga”. More strikingly, countries all around us do that and are better off.
I still maintain that cooperation rather than confrontation remains our only hope towards transformation. I continue to differ on the point that a transitional authority to run the country must be composed of some hired technocrats. I still stand by my argument that no one will agree to just hand over political power to someone called a technocrat.
It is therefore, in my humble opinion, incumbent upon President Mugabe and Zanu PF to create an environment of convergence. It is upon them, to bring back and invite other Zimbabweans that can assist on the task at hand.
It does not make sense to be mourning and lamenting empty state coffers and a wretched economy yet the best finance minister and economist our country has seen is wasting time studying poorly written judgements somewhere in the dark business district of a once sun-shining city.
Of course I am clearly saying Tendai Biti must be given back the economy or, whichever way you like it – the economy must be given back to Tendai Biti. I know, as usual, all opinions on Zimbabwe, even on the economy are interpreted from a political-belonging perspective. But I am not a member of the MDC Renewal; I only want to see Zimbabwe and Zimbabweans working again.
It was Biti who started with a “Reality Check … what we gather is what we eat” 1 billion dollar national budget in 2009 which he again painstakingly grew and handed over to Minister Chinamasa in 2013 when he had set his sights “beyond the enclave” where “unleashing Zimbabwe’s economic growth potential” was a realistic milestone.
For sure, we have lost our mineral, industrial and other resources, but the last thing we should do is understate the value of our human capital resource. In his 2013 Budget Speech Tendai Biti said, “Zimbabwe is a double digit-potential growth economy, endowed with intelligent people, ‘glossators’, ‘epistemologists’, ‘oncologists’, ‘even rocket scientists’. The capacity for cerebral engagement should, thus, be as obligatory as it is desirable.” That was, and still remains, very true.
So, as long as we are not lazy about it, or unnecessarily political about the economy, we have it within ourselves to turn this situation around. We are Zimbabweans, or aren’t we anymore?
When we were faced with white colonial rule, we took up arms to liberate ourselves. We were again faced with hyperinflation, relentless food shortages and all kinds of economic calamities; we came around again and did the right thing. This situation is no different; we can figure out solutions to these challenges if we want to.
It is also none other than President Mugabe who said, “I urge you, whether you are black or white, to join me in a new pledge to forget our grim past, forgive others and forget. Join hands in a new amity and together as Zimbabweans trample upon racialism, tribalism and regionalism, and work hard to reconstruct and rehabilitate our society as we reinvigorate our economic machinery.”
Those ideals of cooperation, inclusivity and unity coupled with political maturity and patriotism are what we now need in order to get our beautiful country back on its feet again.
Dr Tapiwa Shumba is a former spokesperson of the MDC in South Africa sharing his personal thoughts.