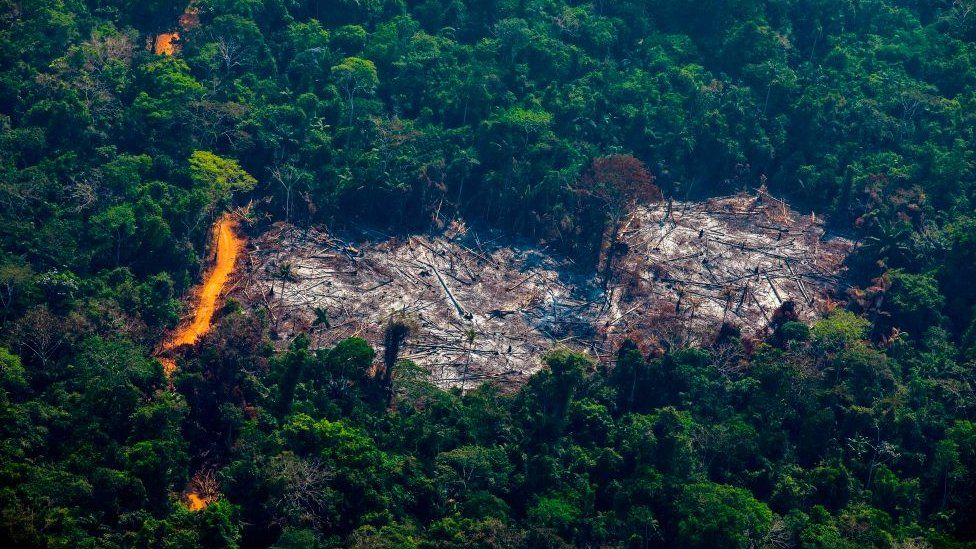 More than 100 world leaders will promise to end and reverse deforestation by 2030, in the COP26 climate summit’s first major deal.

Brazil – where stretches of the Amazon rainforest have been cut down – will be among the signatories on Tuesday.

Experts welcomed the move, but warned a previous deal in 2014 had “failed to slow deforestation at all” and commitments needed to be delivered on.

Felling trees contributes to climate change because it depletes forests that absorb vast amounts of the warming gas CO2.

UK Prime Minister Boris Johnson, who is hosting the global meeting in Glasgow, will call Tuesday’s deal a “landmark agreement to protect and restore the earth’s forests”.

“These great teeming ecosystems – these cathedrals of nature – are the lungs of our planet,” he will say.

The two-week summit in Glasgow is seen as crucial if climate change is to be brought under control.

The countries who say they will sign the pledge – including Canada, Brazil, Russia, China, Indonesia and the Democratic Republic of the Congo – cover around 85% of the world’s forests.

Some of the funding will go to developing countries to restore damaged land, tackle wildfires and support indigenous communities.

Governments of 28 countries will also commit to remove deforestation from the global trade of food and other agricultural products such as palm oil, soya and cocoa.

These industries drive forest loss by cutting down trees to make space for animals to graze or crops to grow.

More than 30 of the world’s biggest companies will commit to end investment in activities linked to deforestation.

And a £1.1bn fund will be established to protect the world’s second largest tropical rainforest – in the Congo Basin.

Prof Simon Lewis, an expert on climate and forests at University College London, said: “It is good news to have a political commitment to end deforestation from so many countries, and significant funding to move forward on that journey.”

But he told the BBC the world “has been here before” with a declaration in 2014 in New York “which failed to slow deforestation at all”.

He added that this new deal did not tackle growing demand for products such as meat grown on rainforest land – which would require high levels of meat consumption in countries like the US and UK to be addressed.

Ana Yang, executive director at Chatham House Sustainability Accelerator, who co-wrote the report Rethinking the Brazilian Amazon, said: “This deal involves more countries, more players and more money. But the devil is in the detail which we still need to see.

“This is a really important step at COP26. This meeting is around increasing the level of ambition and keeping global temperature rises below 1.5C – this is a big building block,” she added.

Climate change is one of the world’s most pressing problems. Governments must promise more ambitious cuts in warming gases if we are to prevent greater global temperature rises.

The summit in Glasgow is where change could happen. You need to watch for the promises made by the world’s biggest polluters, like the US and China, and whether poorer countries are getting the support they need.

All our lives will change. Decisions made here could impact our jobs, how we heat our homes, what we eat and how we travel.

Tuntiak Katan, from the Coordination of Indigenous Communities of the Amazon Basin, welcomed the deal, telling the BBC that indigenous communities were on the frontline of stopping deforestation.

Katan, an indigenous Shuar from Ecuador, said indigenous communities globally protected 80% of the world’s biodiversity but faced threats and violence.

“For years we have protected our way of life and that has protected ecosystems and forests. Without us, no money or policy can stop climate change,” he said.

Indonesia is the world’s largest exporter of palm oil, a product found in everything from shampoo to biscuits. Production is driving tree destruction and territory loss for indigenous people.

Meanwhile, Russia’s huge natural forests, with more than one fifth of the planet’s trees, capture more than 1,5 billion tonnes of carbon annually.

In the planet’s biggest rainforest, the Amazon, deforestation accelerated to a 12-year high in 2020 under Brazilian President Jair Bolsonaro.

“Having Brazil signing the deal is really important because it holds a large chunk of tropical forests. But the money must be channelled to people who can make this work on the ground,” Ms Yang said.

Many people living in the Amazon, including in its urban areas, depend on the forest for their livelihoods and they need support in finding new incomes, she added.

Trees are one of our major defences in a warming world. They suck carbon dioxide out of the atmosphere, acting as so-called carbon sinks. They absorb around one third of global CO2 emitted each year.

Currently an area of forest the size of 27 football pitches is lost every minute.

Depleted forests can also start to release CO2. If too many trees are cut down, scientists are worried that the planet will reach a tipping point that will set off abrupt and unpredictable climatic change.

The 200 countries going to the conference in Glasgow, Scotland, are being asked for plans to cut emissions by 2030.

Climate change is causing more extreme weather. The past decade was the warmest on record, and governments agree urgent change is needed.

At the Paris climate conference in 2015, countries agreed to keep global warming well below 2 degrees celsius – with a target of 1.5 degrees celsius.

At this conference every country will be asked to say how they will help cut emissions.

Decisions made at COP could change our future. From boilers to cars and how you power your home, it’s all up for discussion.

On the second day of the two-week climate summit, the US and EU are also launching an initiative that aims to drive global efforts to cut emissions of methane, a greenhouse gas which comes from sources including fossil fuel extraction and livestock farming.

Dozens of heads of state will join the pledge, which commits countries to cut their emissions of the gas by 30% by 2030.

The opening day of the conference in Glasgow saw India pledge to cut its greenhouse gas emissions to net zero by 2070 – missing a key goal of the COP26 summit for countries to commit to reach that target by 2050.

Among those to address the summit was the Queen, who urged world leaders in a video message to act “for our children and our children’s children” and to “rise above the politics of the moment”.

Outside of the conference, climate activist Greta Thunberg told young protesters that politicians attending COP26 were “pretending to take our future seriously”, calling for an end to “blah, blah, blah”.

Under present targets, the world is on track for warming of 2.7C by 2100 – which the UN says would result in “climate catastrophe”