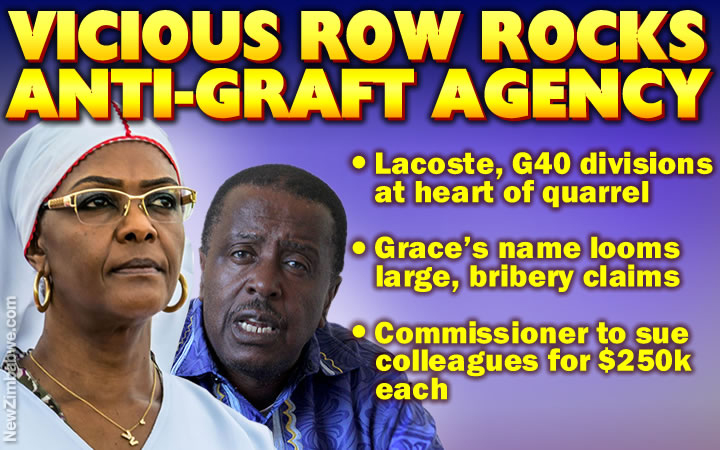 Under-fire University of Zimbabwe Vice Chancellor Levy Nyagura and ICT Minister Supa Mandiwanzira have also been dragged into the dispute.

Commissioners have since petitioned the anti-graft body’s chair Job Whabira to act on Investigations Committee head Goodson Nguni whom they accuse of taking bribes and privately entertaining corruption suspects still under investigation.

Nguni has also been accused of threatening fellow commissioners and leaking information to the press. These include exposing the identities of whistle-blowers and witnesses whose lives he put in danger.

Commissioners further accuse Nguni of being too cosy with corruption suspects to a point of coaching them on how best they could sue Zacc.

But the defiant Nguni has denied the allegations and penned a strongly worded response to the chair, daring his colleagues to persist with the petition and each face a $250,000,00 law suit.

“This is denied,” Nguni said in response to claims he was politicising the commission.

“…What I bring to your attention is that it was Commissioners in Prevention and Human Resources who brought politics into the commission by inviting the leading light in the G40 cabal to launch the national strategic plan.

Nguni’s tirade is in the form of leaked memo he was directing at the Zacc boss.

Since taking over from veteran leader Robert Mugabe last November, President Emmerson Mnangagwa has unleashed the State on his former Zanu PF rivals linked to the infamous G40 faction that tussled for party control with Mnangagwa’s Team Lacoste.

Although not a Zanu PF activist, Nguni is linked to Lacoste.

He adds, “In jest, I said that I was Lacoste as a way of demonstrating that some of you commissioners support G40 cabal and that their interest is in attacking Chairperson Investigations was to influence, stop and prevent further arrest of G40 cabal members.

Nguni further reveals a misunderstanding among his colleagues over the possible arrest of some serving ministers on corruption.

He insists it was tantamount to jumping the gun if Zacc proceeded to arrest the ministers if there was no evidence linking them to any crimes. Nguni accuses commissioners gunning for the arrest and possible discrediting of Mnangagwa’s lieutenants.

“In fact, arrested members of the G40 cabal are looking up to the commissioners to try and stop their arrest…” he said.

“I informed you that commissioners have been asking people to write half-baked allegations against me because I have challenged and dared to arrest Vice Chancellor Nyagura and I would like yourself to investigate whether I am related to Supa Mandiwanzira and Brian Mutandiro (former NetOne CEO) on the NetOne story and that’s why I cleared them.”

Nyagura is under fire for fraudulently awarding Grace a PhD she had not read for.

Mandiwanzira, on the other hand, has somewhat managed to evade arrest even after former NetOne CEO Reward Kangai had written to Mnangagwa accusing the minister of criminal abuse of office and corruption.

Nguni signs off with threats of a civil suit against colleagues.

It could not be established late Wednesday whether the Zacc chair had responded to the petition and Nguni’s response.