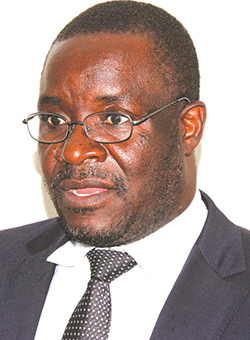 THE media rants by Permanent Secretary in the Ministry of Information, Media and Broadcasting Services, George Charamba against the swop by the Zimbabwe Anti-Corruption Commission (Zacc) on parastatals to investigate corruption and other nefarious activities by senior employees of these state-affiliated organisations smacks of contempt of court, criminal abuse of office and attempts at obstructing the course of justice.
It is common knowledge that Charamba has been fingered in some shady deals at the Premier Service Medical Aid Society (PSMAS) which the Zacc is currently investigating where about $22.8 million has been abused in a shameless top management allowance granting spree during the tenure of Curthbert Dube at the medical aid society.
That fact alone should have forced Charamba to refrain and recuse himself from commenting on an investigation that is likely to rope him in as a suspect. Furthermore, as a senior civil servant and a Presidential Spokesperson, one would have thought Charamba knows one or two things about separation of powers and the need for the executive to allow independent statutory bodies the autonomy to do their work without undue pressure from unscrupulous characters like him who stink of all the missing billions in this country.
But Charamba, in his typical bully fashion, is trying to absolve himself from allegations of dipping his pilfering hand in national coffers by raising the spectre of opposition regime change politics, threats to national security and other childish claims whose sonorous sound only amplifies the public’s clamour that the corrupt should be crucified.
There are things that Charamba inadvertently exposes through his rants in the Herald of 7 June 2016 which he also insinuates in his Nathaniel Manheru instalment of 04 June 2016. The fact of the matter is that Charamba has confirmed that Zanu PF is a patently corrupt organisation that gives sanctuary to very corrupt comprador bourgeoisies whose connection with the party is a symbiotic relationship wherein these characters loot and finance the party’s electoral chicanery while the party returns the favour by forming a government that creates a safe haven for these heartless criminals.
That the activities of these criminals, more often, result in avoidable deaths of the country’s citizens through starvation, lack of medicines in hospitals, road traffic accidents on our potholed and narrow roads, stress and depression, does not matter to these “super patriots”.Advertisement