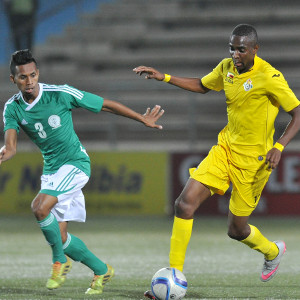 Madagascar 0-0 Zimbabwe
MADAGASCAR goalkeeper Chretien Andriamifehy stood firm as they successfully held Zimbabwe to a goalless draw in a Group A 2016 Cosafa Cup clash at the Sam Nujoma Stadium in Windhoek on Monday evening.
Two draws in two games leave the Warriors on the brink of elimination. The four-time champions will now have to rely on Madagascar and Swaziland playing to a draw in their final match – while they have to beat the Seychelles by at least four goals to advance to the knockout stages of the Southern African competition.
Callisto Pasuwa’s men missed a catalogue of chances throughout the 90 with the Malagasy holding on for a valuable point.
Both teams showed their intent from the get go, moving the ball around the park with real intent.
Following a sustained spell of pressure, Zimbabwe finally opened up the Malagasy defence, but former AmaTuks forward Obidiah Tarumbwa failed to hit the back of the net from close range on 16 minutes.
Danny Phiri then went close three minutes later, a free-kick played short to the Warriors skipper who could only direct his rasping effort straight at the Madagascar goal-minder.
Madagascar’s best chance of the half fell to Dina Razanakoto in the 28th minute. His shot from range had Tatenda Mkuruva worried, but lucky for the Zimbabwe goalkeeper the ball flied just over the crossbar.
Zimbabwe, though, were the better side and ended the half on the front foot. But one got the sense that it was not going to be their night after Madagascar somehow managed to clear their lines with the goalkeeper beaten before Tarumbwa charged into the area before guiding his shot inches wide of goal.
Jomo Cosmos forward Charlton Mashumba squandered a good chance soon after the break as Barea continued to frustrate their more fancied opponents.
The Warriors pushed forward in the closing stages and had one final chance in the 81st minute. But after the ball fell to Bruce Kangwa in a pocket of space in the area, the forward could only manage to direct his effort straight at the Malagasy shot-stopper.
This summed up Zimbabwe’s luck with Madagascar knowing that victory over Swaziland on Wednesday will book their place in the knockout stages of the competition.
TEAMS
Madagascar: Andriamifehy; Sandratriniaina,Tantley, Fetranianina, Manoelantsoa, Dina, Vombola ( Fanomezana 90+5′), Rajaonias (Jaotombo 49′), Raherinaivo (Raveloarisona 90+3′), Randrianmonjanahary, ElefoniAdvertisement