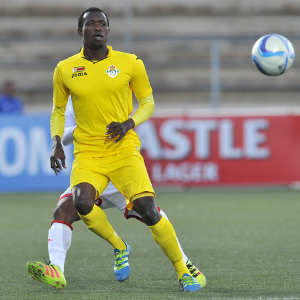 Zimbabwe thumped Seychelles 5-0 in a 2016 Cosafa Castle Cup Group A clash at the Sam Nujoma Stadium in Windhoek on Wednesday evening.
However, the Warriors of Zimbabwe were eliminated from the tournament after finishing second in Group A, while group winners Swaziland set up a quarterfinal clash with Zambia.
Charlton Mashumba nearly handed the Warriors an early lead just ten minutes into the game, but his header was cleared off the goalline by Seychelles defender Yannick Manoo.
Kalisto Pasuwa’s men kept piling pressure on the Pirates defence and in the 21st minute, Bruce Kangwa’s header was well-saved by goalkeeper Vincent Euphrasie.
However, two minutes later, the Warriors were awarded a penalty and Ronald Pfumbidzai stepped up and beat Euphrasie from the spot-kick to make it 1-0 to Zimbabwe.
In the 34th minute, Tatenda Mudehwe made a good run down the right-hand side before unleashing a good shot which was saved by Seychelles shot-stopper Euphrasie.
Mudehwe did find the goal he was looking for eight minutes before the halftime break when headed home Pfumbidzai’s beautiful cross to make it 2-0 to the Warriors.
The Pirates attacker Achille Henriette forced Zimbabwe shot-stopper Tatenda Mukuruva into a good save as Seychelles searched for their first goal nine minutes after the restart.
However, it was soon 3-0 to the Warriors when Lawrence Mhlanga headed home Pfumbidzai’s corner-kick after the Seychelles defence was caught napping.
In the 73rd minute, things went from bad to worse for the Pirates as Teenage Hadebe headed home from a corner-kick to make it 4-0 to Warriors.
Mhlanga netted Zimbabwe’s fifth goal in stoppage time with a decent a finish to seal a 5-0 victory for the Warriors.
TEAMS
Zimbabwe: Mkuruva, Mhlanga, Zvirekwi, Mudehwe, Masuku, Tarumbwa (Chawapiwa 57’), Hadebe (Moyo 82’, Kangwa, Kutinyu (Manure 72’), Pfumbidzai, Mashumba
Seychelles: Euphrasie, Manoo, Onezia, Joubert, Waye-Hide, Basil, Henriette (Maillet 76’), Hopprich, Esther, Tamboo, Bibi.Advertisement