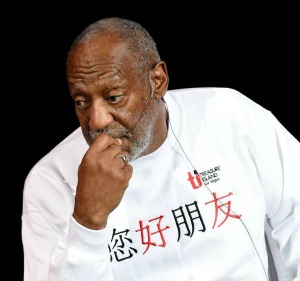 A DEFIANT Bill Cosby hit back Wednesday at sex allegations swirling against him, declaring: “I’m far from finished.”
The embattled 77-year-old actor-comedian, a household name in the United States and beyond, has repeatedly denied any wrongdoing in the face of accusations dating back decades by some 30 women.
He has not been charged with any offenses but his glittering career has taken a huge hit.
Cosby went on the front foot Wednesday, releasing a statement reading: “Dear Fans: For 53 years you have given me your love, support, respect and trust. Thank you! I can’t wait to see your smiling faces and warm your hearts with a wonderful gift — LAUGHTER. I’m ready!
“I thank you, the theatre staff (Heymann Performing Arts Center), the event organizers and the Lafayette Community for your continued support and coming to experience family, fun entertainment. Hey, Hey, Hey — I’m far from finished. Sincerely, Bill Cosby.”
The Emmy and Golden Globe winner was referring to a show in Louisiana on Friday, although he has previously seen numerous appearances cancelled or postponed after the damaging allegations surfaced late last year.
Cosby is famous for his role in “The Cosby Show,” a popular family sitcom that aired in the 1980s and 1990s.
US prosecutors declined in December to charge Cosby over allegations he sexually assaulted a 15-year-old girl in the Playboy Mansion in 1974.
Prosecutors cited the statute of limitations — which limits how long legal action can be taken after an alleged crime — in declining to pursue the case.
In January another woman came forward, saying Cosby drugged and sexually molested her in 2008.Advertisement