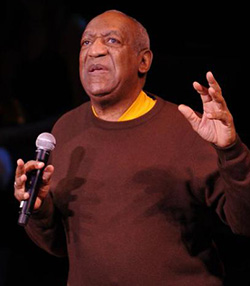 A MODEL  who claims Bill Cosby drugged and sexually abused her at the Playboy Mansion met with Los Angeles police on Wednesday to pursue criminal charges against the comedian over the 2008 incident.
An attorney for Chloe Goins said after the meeting that his client is the first woman accusing Cosby of sexual misconduct whose case may fall within the statute of limitations.
More than 15 women have accused Cosby of sexual misconduct, including several who say the comedian drugged and raped them in incidents dating back at least four decades.
Goins did not speak during a press conference Wednesday. Her attorney, Spencer Kuvin, said she came forward after hearing about other women describing abuse by Cosby and realising she might have a valid criminal case.
An email to Cosby’s attorney, Marty Singer, was not immediately returned.
Kuvin declined to discuss what Goins told detectives but restated her allegations that Cosby drugged her at a 2008 event at the Playboy Mansion.
Goins does not know what happened while she was blacked out but Kuvin says she awoke to find herself naked and Cosby over her.
“Ms. Goins and I are here for two reasons: for justice and accountability,” Kuvin said.

Meeting with the police … Chloe Goins and her lawyer on Wednesday