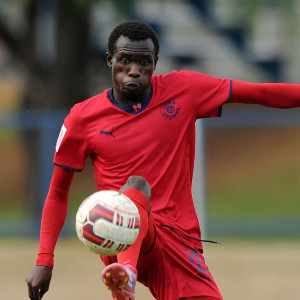 JOMO Cosmos forward Charlton Mashumba has left for trials in Switzerland on Wednesday but will return just in time for the resumption of the National First Division.
The 22-year-old has been a sensation in the second-tier this season with his goals helping catapult the side to the top of the standings.
He will return to the country on Tuesday, 24 hours before Cosmos re-start their league campaign with an away trip to Black Leopards.
Described by the club as “skillful and strong in the air with excellent passing ability, and a classy player and aggressive striker”, the club that Mashumba is on trial at has not been revealed, but it is believed to be a top-flight team.
The move would only happen in the next transfer window at the end of the season.
Mashumba, a junior international with Zimbabwe but not yet capped by the senior team, has netted eight times in this campaign, making him joint-second highest scorer with teammate Brice Aka.
They are both four goals behind Ace Bhengu from Thanda Royal Zulu.
Mushumba earned a reputation as a teenage sensation in Zimbabwe where he played for Blue Ribbon, before joining then NFD side Blackburn Rovers.
He moved Cosmos in January 2014 and immediately made his mark with eight goals in 12 starts in the second half of last season.
He has now taken his overall tally for the club to 16 goals in 25 starts in the last 12 months, a very healthy return.