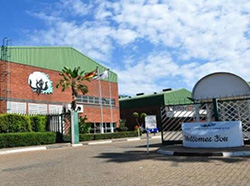 THE troubled Cotton Company of Zimbabwe (Cottco), sub-Saharan Africa’s largest ginner and marketer reported a $30,2 million loss for the full-year to March from a profit of $14,9 million last year citing poor lint prices and low margins.
Despite increasing its cotton intake by 24 percent to 43,697 tonnes in the year, Cottco said lint prices averaged 72 cents per pound (454 grams), lower than the 89 cents per pound in the prior year. Nationally, cotton output fell to 135,000 tonnes from 145,000 tonnes in the previous year.
Once an undisputed dominant force in Zimbabwe’s agro-industrial sector and a major employer, Cottco has hit turbulent times recently.
Last November the company applied for its sole cotton ginning subsidiary to be placed under judicial management to avert foreclosure over debts running up to $50 million.
It subsequently withdrew the application, apparently after reaching some agreement with its creditors.
Cottco’s loss includes impairments of $11,2 million in respect of trade and other receivables. Cottco noted that the 2014 profit was boosted by the $37,2 million arising from profit on the disposal of discontinued operations.
Revenue for the year fell nine percent to $38,3 million as lint prices continued to weaken. Operating margins were squeezed by high producer prices which the company was paying to maintain its market share.
“Group operating margins have remained low and were compounded by high producer price paid as a market defence mechanism, a strategy implemented in order to protect market share and to set the tone for discipline in the industry for seasons to come,” said the company in a statement accompanying the unaudited financial results.
The group, which was suspended from trading on the Zimbabwe Stock Exchange on November 6 last year, was granted permission by the bourse to delay publishing the results.
Finance costs fell 40 percent to $8 million and the company said it was discussing with lenders to restructure its debt.
Going forward, Cottco said it will pursue cost containment strategies, with lint prices likely to continue falling.
In January this year, executive chairman Douglas Ncube told The Source that the company was looking to diversify into cooking oil production to anchor its turnaround.Advertisement

The company has five ginneries in Zimbabwe’s major cotton-growing regions, with capacity to produce 150,000 tonnes of seed cotton.