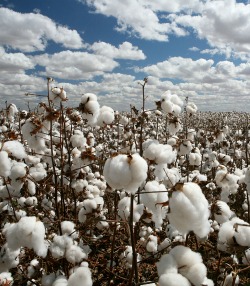 THE Cotton Ginners Association (CGA) has revealed that cotton output for the 2013 marketing season declined by 59 percent owing to poor rainfall patterns and the low producer price.
Statistics from CGA show that 143 million kilograms of cotton seed were sold during the 2013 marketing season compared to 350 million in 2012
The 2013 marketing season, which began at the end of April, closed in August 2013. Depending on the season and size of crop, the marketing of seed cotton usually takes place over three to four months.
Cotton prices can be very volatile and African cotton growers produce about 1,3 million tonnes of cotton lint which is 6 percent of the world’s production and the continent consumes only 1,5 percent of the world’s lint production.
More than 75 percent of local production is exported making domestic value addition insignificant.
The local producer prices follow the dictates of the international lint trends where most of the country’s production is sold.
In Zimbabwe, cotton production is a source of livelihood for over 250,000 households.
Over the years, ginners have lost confidence in the sector due to rampant side-marketing with those who would have funded the crop lose out to unscrupulous buyers who entice contracted cotton farmers with better prices.
As a result, there has been a significant reduction in cotton funding, hence the downward spiral in output.
Funding for farmers has declined from about US$44 million to about US$22 million while yield per hectare declined from 0,8kg to 0,5 kg per hectare in the small-scale farming areas.
Merchants are also complaining about the unavailability of cheap funding caused by the interest rate spike, triggered by the cash squeeze rattling local markets.
In the previous season, farmers produced 283,000 tonnes from 422,000 hectares, earning the country over US$200 million. Zimbabwe achieved an all-time peak of 353,000 tonnes in 2000.
Despite perennial price disputes between farmers and merchants, cotton remains the country’s second largest foreign currency earner in the agricultural sector after tobacco.
The labour intensive crop is, however, under threat as buyers are failing to provide a sustainable price to farmers because they cannot influence prices on the international market.Advertisement

Side marketers take advantage of their low cost bases arising from the fact that they do not fund farmers to produce the crop and that their operations are informal to offer prices that are slightly higher than what is offered by the other players.
With smallholder farmers producing 99 percent of the crop and 95 percent of it under contract, the country has the potential to produce at least 600,000 tonnes of cotton at an average yield of between 1 500kg to 2 000 kg per hectare.