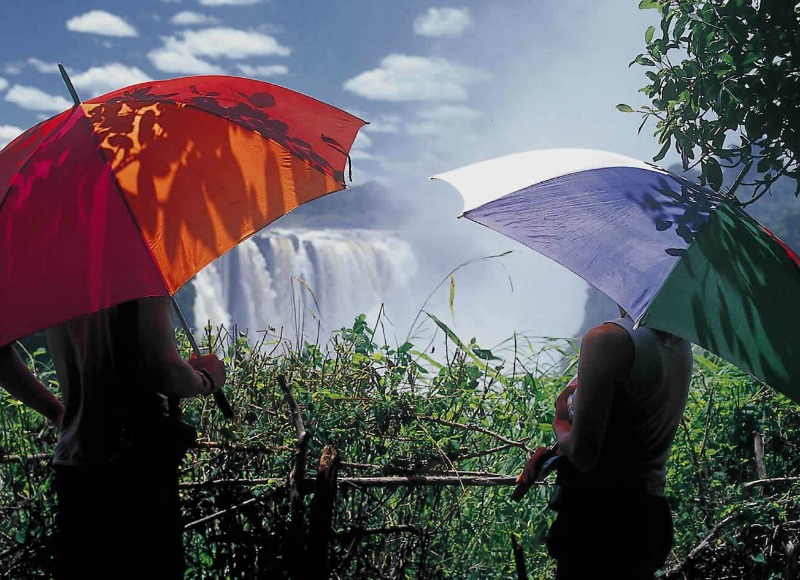 With every passing minute, 500 million cubic metres of roaring water rush over the edge, falling into a gorge more than 100 metres below. The sound is thundering, the sight spectacular.

Once again, the Victoria Falls – locally known as Mosi-oa-Tunya, which means “the smoke that thunders” – is at its peak, but only a few can witness this magnificent cascading waterfall straddling Zimbabwe and Zambia.

Prior to the coronavirus pandemic, more than 350,000 people each year trekked to the Zimbabwean side of the waterfall to see one of the world’s natural wonders. But since then, there have been hardly any visitors.

Now, hopes are high that a vaccine rollout could bring back much-needed tourism in the resort town – but for some holiday businesses, it might take more than just a COVID-19 shot to recoup the losses in a country that has been in the throes of a severe economic crisis.

Zimbabwe recorded its first coronavirus case a year ago, a resident of Victoria Falls. Although patient zero recovered, the country has registered more than 1,500 COVID-19-related deaths and nearly 37,000 infections since last March.

With a strict national lockdown enforced, tourist activities in the resort town, as in many other places across the country, were shut down for months on end. However, the advent of the country’s vaccination drive using Chinese jabs means that restrictions have since eased.

Launched on February 18, the first phase of the campaign targeted some 60,000 healthcare and other front-line workers. Of them, however, only 44,000 have been inoculated so far.

Last week, President Emmerson Mnangagwa took his first shot of the Sinovac vaccine to launch the second phase of the vaccination programme that is intended for the elderly, teachers, religious leaders, people with critical illnesses – and all adult residents of Victoria Falls, a city of some 110,000 people.

In a symbolic move aimed at promoting tourism recovery, Mnangagwa travelled to Victoria Falls to get his shot on Wednesday.

Since then, residents of the tourism-dependent town have been forming snaking queues outside public hospitals and clinics, waiting for their turn to get their first dose of the vaccine.

Moreblessing Khumalo, a travel consultant for a company that offers cruises and rafting adventures on the Zambezi River, said although she was afraid of any unknown side effects, inoculation was necessary for life to go on.

“I’m scared, but there’s no other way we can do this,” the 31-year-old told Al Jazeera. “In this town, people need to go back to work; others need to reopen their businesses and even for me, as time goes on, it will become impossible to serve my clients if I don’t get vaccinated,” she said.

“Once I get back to work I’ll start to meet people from all over the world so I need to take the vaccine to protect myself and my family.”

Vaccination is voluntary, but for some people, it is a requirement to return to work.

With the programme seemingly moving forward at full speed and international flights slowly resuming, Victoria Falls is preparing to welcome foreign visitors again – even as the land borders to Botswana and Zambia remain closed to public transport.

Elated, Lazarus Jamu, 48, a caretaker at a local hotel, said he felt freer after receiving his first injection.

“I’m happy; I got vaccinated so that I can be free in everything I do,” he told Al Jazeera. “I will be free to move around and to do my work because I’ll be fit, I won’t have that fear of getting corona[virus] any more.”

However, some have said Zimbabwe’s tourism and hospitality industry needs more than a vaccination drive to get back on track.

Earlier this month, the government announced a $5.8m scheme that will see the government provide a 50 percent loan guarantee for businesses in the tourism sector. The move met criticism by opposition figures, who described it as risky and cautioned that struggling taxpayers could be forced to foot the bill if the companies defaulted.

Others, however, said the loan facility should be extended to cover all businesses in hospitality.

“More players need to be able to access such facilities after one year of varied operations ranging from full closure to curfew and occupancy constrained trading,” said Bongai Zamchiya, head of the Restaurant Operators Association of Zimbabwe, stressing that many operators are in critical need of financial backing.

“As an industry, the support we seek is the same that has been seen around the world: from stimulus that increases aggregate demand, furlough that protects jobs and concessionary funding or tax breaks that will ensure business sustainability.”

During government consultations last year, tourism operators called for a financial relief package to help them offset the impact of the pandemic, but little aid was given to private enterprises.

According to the Zimbabwe Tourism Authority (ZTA), tourism contributed 7.2 percent and 6.5 percent of the country’s gross domestic product in 2018 and 2019, respectively. But with business slowing down last year, Zimbabwe’s tourism sector is estimated to have lost at least $1bn in potential revenue, the ZTA said.

Meanwhile, the pandemic has added another dimension to Zimbabwe’s economic crisis which has seen its local currency rapidly devaluing and the US dollar and South African rand operating as de facto currencies.

Intermittent shortages of cash and other basic commodities such as fuel have been constant indicators of a crippled economy whose dire state has been exacerbated by COVID-19, inflation and drought.

After the economy contracted by more than 7 percent in 2020, it is expected to rebound by 2.9 percent due to improved rainfall and falling inflation, according to the World Bank.

The government hopes to inoculate 60 percent of the country’s 14.8 million people in order to achieve herd immunity by the end of the year.

Back in Victoria Falls, Clive Chinwada, president of the Hospitality Association of Zimbabwe, said the resort town had been deeply scarred by the pandemic and the slump in global travel. He warned it would take time to see a significant change in foreign tourist arrivals and an increase in hotel occupancy rates.

“The situation is quite bad and will likely be so for quite some time as recovery is now likely to only start in 2022 for international travel,” he said.

This article was first published on Aljazeera