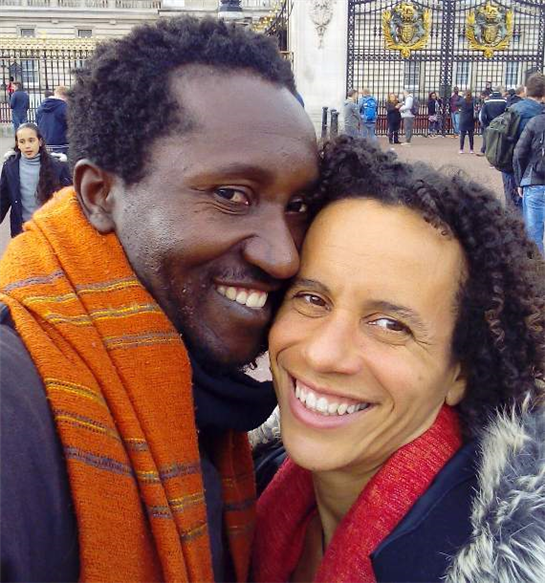 *This article is taken from the Okehampton Times.
A MARRIED couple living in Chagford can now celebrate and enjoy their first Christmas together, after being kept apart for 16 months while they fought for a UK spouse visa.
Meeting through their mutual love of music and dance, Denise Rowe and Kennedy Chinyere first laid eyes on each other in rural Zimbabwe nine years ago.
“The first time I saw De I felt like this was the woman I was going to spend the rest of my life with,” said Kennedy.
It was in April 2007 when Denise, from Okehampton, began a journey that led her to the man she would eventually marry. This journey was into ceremonial mbira dance — a traditional dance native to Zimbabwean culture.
Denise initially travelled to Africa to learn more about the art form and her adoration of the dance led her to find a new love in Kennedy.
Denise said: “On my first visit to Zimbabwe I was struck by what a good guy Kennedy seemed to be, but didn’t know if I’d ever see him again.
“I returned to Zimbabwe in 2011 and Kennedy and I became close friends, sharing laughter and late night talks under the stars.”
Kennedy also carved me a beautiful wooden sculpture of a monkey which I took everywhere with me for the next three years.
In 2014 Denise returned to Zimbabwe on a hunch, thinking this might be the last time she travelled to Africa.
However, she said that this trip turned out to be ‘the gateway into a new life’, as it became clear to her that she and Kennedy were destined for one another.
Their romance only blossomed when Denise returned to Zimbabwe in August 2014 and January 2015 to visit. It was then when Kennedy proposed.
“Everything in me said yes,” said Denise.
“It was a choice of whether to live this life or let it pass by. I said yes to life.”
After much bureaucracy and travelling the couple married in Zimbabwe last April.
The ceremony was held on a sacred mountain followed by a joyful procession to Kennedy’s village, a feast cooked by many women on open fires, and celebrations into the night.Advertisement

It was after they were married they began the process of applying for Kennedy’s visa to join Denise living in the UK.
Denise said: ‘The process of bringing someone to the UK is epic. In June 2015 we applied for a four-month visitor visa.  At that point we were not in a financial position to be able to apply for a long term visa as we needed tens of thousands of pounds in the bank.
“The application process cost us around £600 and was refused with no right of appeal. The authorities did not believe Kennedy would return to Zimbabwe at the end of the visit, even though he had no intention of overstaying.
“This was heartache. We were stunned, bewildered, mourning the time we should be spending together as newlyweds.
“Struggling to do this alone, we reached out for help.  And in July 2015 we raised over £3,400 from supporters from all over the world who were moved by our story, and we began the journey towards Kennedy’s spouse visa.”
Step one for Kennedy was the English exam which he studied hard for and passed in November 2015.
The next step towards gaining a visa was the Tuberculosis test, which the newlyweds had hoped would be straightforward. However there was an anomaly in Kennedy’s left lung which meant further tests and setting back the visa submission date for a couple of months.
In March 2016 Denise returned to Zimbabwe to see Kennedy and to run a dance retreat in the village. Meanwhile, back in the UK, she had a team of friends checking her emails for important documents regarding the visa application.
The couple told of the delays from the bank and some items lost in the post. It was almost time for Denise to leave Zimbabwe again when the last documents finally arrived.
This enabled the couple to book their appointment for a mandatory visa interview. They then said another sad farewell at the airport as Denise returned to the UK, not knowing when or where she would see her husband again.
Kennedy submitted his UK spouse visa application in May 2016.
The couple said they waited, for what felt like forever, as the visa application was processed.
Denise said: “By mid July I thought I was going crazy. I had a window of time in August and decided to return to see Kennedy as we had no idea what the outcome of our visa might be.
“We spent a relaxed and nourishing couple of weeks together in the beautiful house of stones that Kennedy built for us in his village.
“My return flight to the UK was booked for August 12. In the village there is not internet reception so we didn’t know about our email saying a decision had been made.
“Due to opening hours and erratic transportation it was not until August 12 that we went to find out the decision. Kennedy dropped me at the airport and headed off to the offices.
“I was about to board the plane when I received a text from Kennedy saying, “we got the visa! I am coming to England.”
Kennedy said: “I was so happy to come to here, because when I was in Zimbabwe I was always thinking about my wife.
“But, I was a little bit nervous about speaking English, it was a challenge.”
Denise added: “Kennedy has always been an inspiration to me, he feels like a soulmate, a kindred spirit.
“We often say we were chosen for each other by our spirits.”
Now the couple say they are delighted to be finally living as one, and are looking forward to spending their first Christmas together.
Denise said: ‘We are so grateful to all the support from friends and family in the UK. Everyone has made Kennedy feel so welcome!
“Now that Kennedy is here, everything is new.
“We are embarking on an adventure together, finding our way through the extraordinary labyrinth of married life.”