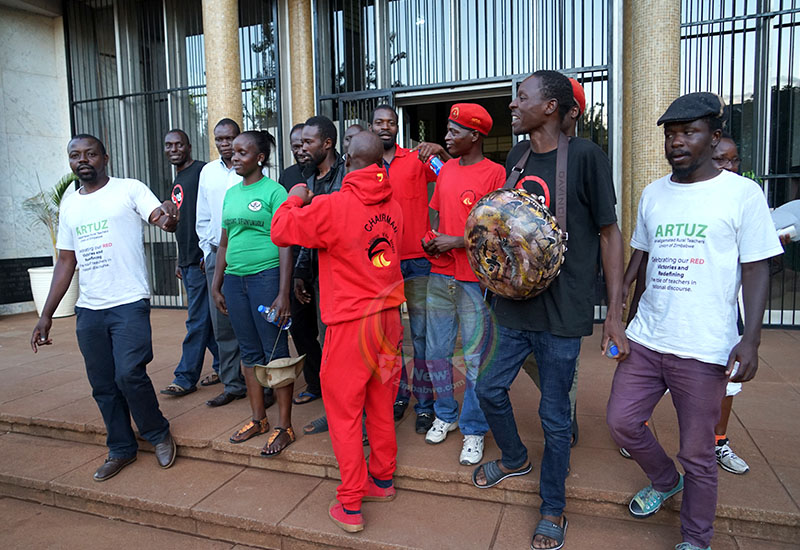 A group of rural teachers who were arrested Tuesday for embarking on a 275km protest march to demand US dollar wages from government were cleared of disorderly conduct charges on Wednesday.

The 14 educators who comprise leaders of the militant Amalgamated Rural Teachers Union of Zimbabwe (ARTUZ) were detained at Harare central police who charged them with disorderly conduct.

Police alleged the group blocked a road in Ruwa while holding and waving placards during the Mutare-Harare march which they dubbed Salary Caravan.

But their charges were thrown out by Harare magistrate Victoria Mashamba who said in her ruling that the state had failed to prove beyond reasonable doubt that any law had been broken by the defiant teachers.

“The state failed to prove beyond reasonable that members of the union broke any law.

“The court therefore dismisses all charges against the 14 accused members as demonstrations, singing and waving placards are not in any way illegal,” read the judgement.

ARTUZ president Obert Masaraure said the court ruling vindicated their position that they had embarked on a peaceful march.

“The state actually failed to convince the court that there was any case of disorderly conduct on the day,” Masaraure said.

“What they actually proved was that there was a lot of peace and ecstasy on the day which is allowed according to section 59 of the constitution of Zimbabwe.

“This is victory for the movement, victory for labour because for too long we have been forced to seek police clearance whenever we had to engage in such activities.”

It was the teachers’ second such arrest since they embarked on the walk after they were first arrested in Macheke on Saturday and were freed by a Marondera court.

The teachers continued with their act of defiance Thursday when they went and besieged Finance Minister Mthuli Ncube’s offices in central Harare.