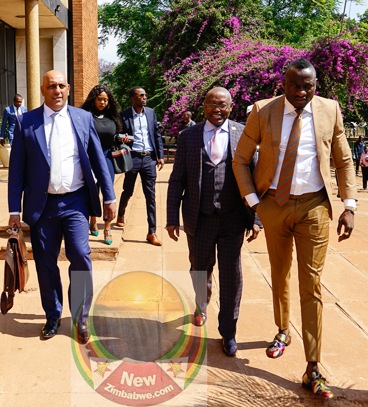 Kadungure complained that fellow show-off tycoon Wicknell Chivayo, previously co-accused in the same case – was “untouchable” and enjoyed the protection of powerful individuals.

He was accused together with Chivayo before the latter was freed by Harare magistrate Morgan Nemadire at the close the State’s submissions.

The magistrate said there was nothing linking Chivayo to the alleged offence.

However, Ginimbi insisted Thursday that it was Chivayo who duped the complainants.

Court heard that he tried to no avail to get Chivayo arrested.

“I felt powerless. I even went to high offices to seek help to no avail,” said Ginimbi.

“I approached high offices to seek help. I ended up in the office of former first lady Grace Mugabe to try and get help in apprehending Wicknell but nothing happened because he was just untouchable.”

Narrating their ordeals, legislator Nduna and fellow complainants Evon and Enock Gatawa said they communicated with Kadungure and that they never interacted with Chivayo.

Even so, Kadungure insisted it was Chivayo who defrauded the complainants.

The court then quizzed him on why he contacted the complainants and subsequently refunded the Gatawas $50,000.

Kadungure said he did so on the advice of his lawyer to save time and also protect his reputation.

“Now I’m here in court yet I should be out there making more money.”

Ginimbi is expected back in court at the end of the month.

Ephraim Zinyandu is prosecuting while Jonathan Samukange appeared for the defence.