A HARARE man on Monday took the court through how he lost his house and hard-earned cash to a prominent businessman Frank Buyanga, adding that he has never felt so heartbroken his entire life.

Narrating his ordeal before Harare magistrate Hosea Mujaya, Steven Nyoka said he started living at the property in 1983, only to be evicted in 2010 by East River Investments, a company owned by Buyanga.

Bishop Jeche, a property manager at East Rivet Investments Pvt Ltd, is being charged with perjury, money laundering and fraud over the case.

He denies charges and has since written to the prosecutor general saying it is Buyanga who should be before the court.

Nyoka alleged that Buyanga sold his house after he gave him title deeds to the Mabelreign property as surety for a $19,000 loan at 10 percent interest.

The house was then valued at $130,000 and the loan was for a period of three months.

“An administrator at Buyanga’s company Hamilton Properties told me everything was computerised and made me to sign a document headed ‘agreement of sale’. I did not get any receipts,” said Nyoka.

“I then asked Buyanga why the document had that title when I was not selling my house and he told me they did that for security reasons which he did not disclose to me.

“He added that I should not worry because my house was worth more than $19,000 which I signed for.” 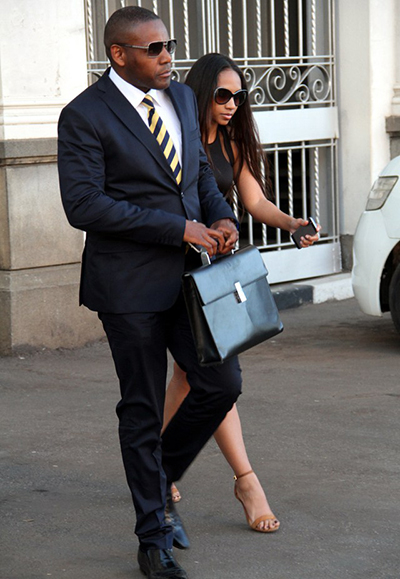 He said Buyanga personally signed the agreement of sale at his offices in Harare’s Avenues area.

Court heard that Nyoka went on to pay interest on the loan of $2,000 for two months. The agreement allowed him pay the interest first and the capital sum as the final payment.

However, when he went Buyanga’s office to make the final payment, Nyoka met other aggrieved clients who warned him about the shady deals.

“One of them advised me to check with the Deeds office claiming that he just discovered that Buyanga had registered his house in one of his company’s name.

“I then went to the office in February 2010 only to find that my house was now registered in Buyanga’s company.”

Nyoka said he confronted Buyanga about the discovery.

“He (Buyanga) said I don’t have anything to say. What I know is that I bought the property,” court heard.

Buyanga has however, not been brought to court over the case with the papers citing Jeche as the accused together with an unnamed accomplice who is said to be still at large.

Through his lawyer Admire Rubaya, Jeche he was not involved in any transaction or arrangement with the complainant.

In a letter addressed to Prosecutor General Kumbirai Hodzi, Jeche said circumstances of the matter pointed to Buyanga as a major player in the offence.

“The complainant alleged that he was duped into selling his property and the person who allegedly duped the complainant is one Buyanga who is not before the court.

“In all this neither the first nor second accused (Jeche’s company) was involved, “reads the letter.

Prosecuting, Ephraim Zinyandu alleged that sometime in August 2009 Nyoka entered a loan agreement of $19,000 with Buyanga and one of his companies.

The terms of the loan were that an interest of 10 percent per month would be paid together with the capital over three months.

However, since Buyanga’s company was not a registered money-lender, the loan agreement was to be concealed by disguising the arrangement as a simulated agreement of sale for Nyoka’s house at 6 Danbury Avenue, Mabelreign.

The complainant was made to sign a declaration as seller and acknowledgement of receipt of the $19,000.

It was alleged that Nyoka then tendered his title deeds as security for the loan.

According to State papers, Nyoka was made to believe that the signed documents were for securing the loan only and this arrangement allegedly happened to many people who later reported cases of fraud against Buyanga.

The court heard that a forged Capital Gains Clearance and declaration by seller were then used to purport that Nyoka had sold the house for $19,000.