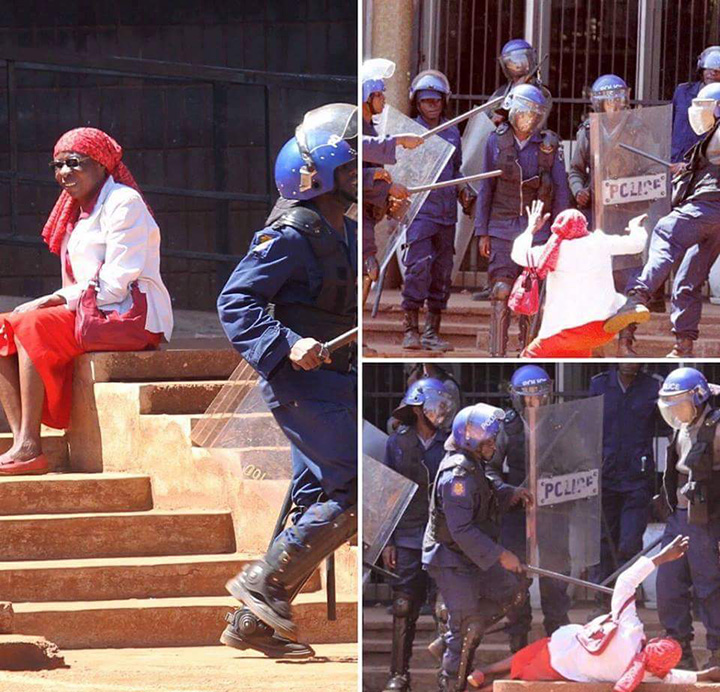 THE Zimbabwe Republic Police and the Home Affairs Ministry have been ordered to pay $13,000 in compensation to an elderly lady who was assaulted by riot cops during the 2016 anti-riot cops.

64-year-old Lillian Chinyerere made the headlines after images emerged of her surrounded by anti-riot police officers.

Some of the cops were kicking her, and some beating her with truncheons as she was seated outside the Harare magistrates court entrance.

The cops accused her of being an opposition MDC activist after she attended court while dressed in red.

She had however, been caught in the crossfire as opposition activists took cover in the court grounds during clashes with the police.

According to summons filed in the High Court by her lawyers, Chinyerere, who suffers from high blood pressure and is diabetic, suffered the ignominy of a brutal assault on her ageing body in full view of the public.

She was represented by attorneys Kudzayi Kadzere and David Hofisi of the Zimbabwe Lawyers for Human Rights.

Court said Chinyerere suffered harm to her dignity as she was humiliated in full view of the public.

She also suffered injuries to her back and shoulder and was unable to continue with her job as a tailor, forcing her to rely on well-wishers for her sustenance.

The court ordered the police and the ministry to pay US$5,000 in damages for pain and suffering, another US$5 000 being damages for contumelia (indignity), and US$2,500 being special damages for loss of income while US$1,000 as damages for past and future medical expenses.

In court, the ZRP chief and the home affairs minister, who were represented by lawyers from the Civil Division of the Attorney General’s Office, had denied the allegations.

The two claimed Chinyere made up the assault allegations in a bid to tarnish the image of police.