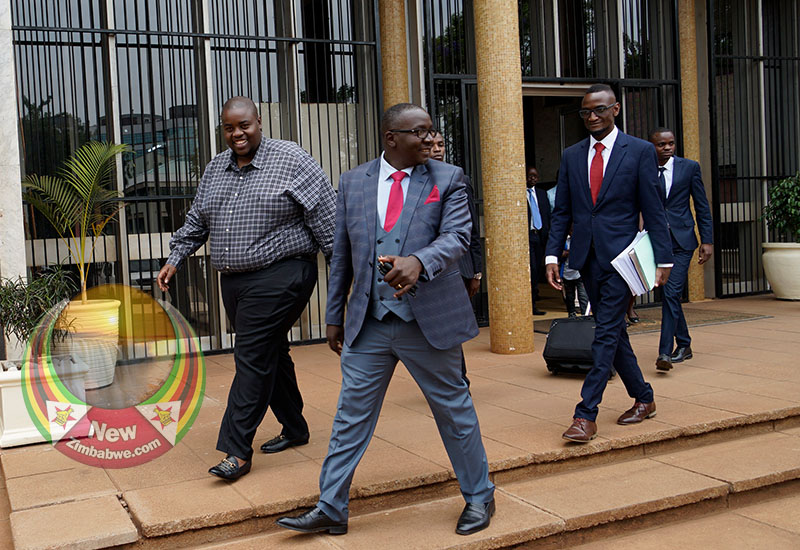 Wicknell Chivayo (left) with his lawyers on Wednesday
Spread This News

The youthful tycoon is denying the charges.

Chivayo was awarded a $200m tender by ZPC to develop a solar power plant in Gwanda to help alleviate electricity supply shortages in the country.

He was given a $5m advance for commencement work but allegedly squandered the cash personal pursuits unrelated to the tender.

Chivayo appeared before Harare magistrate Lazini Ncube Wednesday but the case did not progress beyond the pleading stage after the businessman filed for excerption to the charges.

He is charged with money laundering, contravening the Exchange Control Act and fraud.

“I plead not guilty to the charges,” the youthful tycoon said.

The case was then was remanded to November 15 when a ruling on his exception application will be delivered.

Meanwhile, prosecutor Venerandah Munyoro told Court that Chivayo spent the part of the money buying tickets to bring back home Zimbabwean women who had been trafficked to Kuwait.

“The paper trail indicates that the accused used the funds meant for feasibility study and pre-commencement work for his own personal benefit,” said Munyoro.

“(He diverted the funds) to various individuals and companies that were not involved in the intended activities for which pre-funding was intended targeted.

“Investigations have established that the funds were used to purchase vehicles and air tickets for girls stranded in Kuwait, pay school fees and as well as the settlement of civil suites.”

Chivayo came to the rescue of 32 Zimbabwean women who were lured to Kuwait to work as housemaids but ended up being abused as sex slaves in April 2016.

He reportedly bought flight tickets worth US$58,900 for the stranded women who were rescued by a Zimbabwean parliamentary delegation.

The ZPC tender is also at the centre of controversy with former energy minister Samuel Undenge in court for allegedly influencing its award to Chivayo.