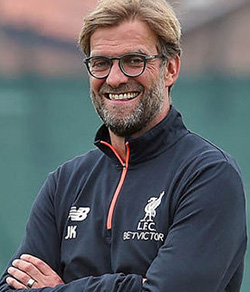 LIVERPOOL manager Jurgen Klopp has told Barcelona they are wasting their time trying to sign Brazilian playmaker Philippe Coutinho – no matter the offer.
Klopp has already rejected a $93 million bid for Coutinho, who scored a superb winner in Liverpool’s 2-1 Premier League Asia Trophy victory over Leicester City in Hong Kong on Saturday.
Barca are set to test Liverpool’s resolve with an improved offer but Klopp has told the Catalan giants not to bother.
“If I say he is not for selling, he is not for selling,” the German told British media.
“There is nothing else to say. It’s a club decision, it’s my decision. That’s how it is.”
Liverpool sold Luis Suarez to Barca and Raheem Sterling to Manchester City in recent years but Klopp bristled when asked if he had received assurances from the board that Coutinho would not be next.
“I can say 20 times, he is not for sale,” said Klopp, who has been frustrated so far in his attempts to sign Leipzig midfielder Naby Keita and Southampton defender Virgil van Dijk during the transfer window.
“If you ask the other question the other way and I say, ‘there has been no assurance’, you make the story the other way.
“With Suarez I was far away,” added the former Borussia Dortmund coach, who joined Liverpool in 2015.
“When the club sold Sterling I was maybe the last to know about it. Those situations have nothing to do with this one.
“We are approaching a very important moment and we want to get better. For this we have to keep our key players,” said Klopp, insisting his word was final.
“There is no story for me,” he added. “Whatever happens from their side, I say he is not for sale. You can say whatever you want. The answer is ‘not for sale’.”
Klopp confirmed he had spoken to Coutinho in private at the team’s hotel in Hong Kong before Saturday’s game but refused to reveal what was said.
The German did, however, explain the reason for his first-half rant at referee Bobby Madley following some heavy challenges on Coutinho.
“I was not too happy about two decisions around Phil,” said Klopp. “He (Madley) told me if I behave like I behaved today (in the Premier League) then I would have to go in the stands.
“I said: ‘If I behave like today then I go in the stand, no problem. But you have to change how you whistle’. For me, it was a clear foul, it’s dangerous.”Advertisement