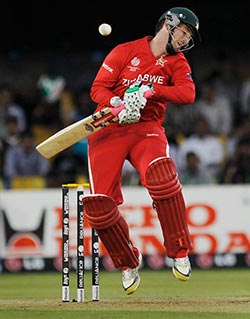 ZIMBABWE will miss Charles Coventry for the Twenty20 World Cup competition after the talented batsman pulled out of the squad citing the national association’s dicey financial situation.
Coventry had been named as part of the 30-men squad to start preparations, but he confirmed that he was leaving for Dubai on Monday.
“I am leaving tomorrow (Monday), and I will not be available because of the financial situation at ZC,” he said.
“I am still available to play for Zimbabwe once the situation improves. I’m not thinking about international cricket for now, although it would be nice to be Zimbabwe colours in future.”
The national team will have to be at their best to make it to the group stage of the tournament after they found themselves in a tricky preliminary stage group B that includes associate members Ireland, Netherlands and United Arab Emirates.
The squad, which has no surprise call-ups, will be trimmed to 15 players by February 15 and the final select will battle it out with ambitious and improving Ireland on March 17 in Sylhet before taking on Netherlands two days later at the same venue.
Zimbabwe then wrap up their qualifying campaign with the United Arab Emirates on March 21, expected to have proved their difference with opponents in this unfashionable territory which hosts Bangladesh also find themselves in.
There is a possibility the hosts could fail to qualify to the main group stages of this fifth edition of World Twenty20 tournament, which for the first time will see 16 teams participating, including associate members who made it through the ICC World Twenty20
Qualifiers.
Top eight full member teams in the ICC Twenty20 Championship rankings automatically qualify to the Super 10 stage.
In a season where uncertainty has hovered over the future of domestic cricket that has been characterised by player boycotts over unpaid salaries, it will take some heart and hard work for the team to perform well at this tournament.
A player boycott has already affected Pro50 matches.
“We remain in discussion with financial institutions over the player salaries,” a Zimbabwe Cricket press release said.
“We are unable to actually provide guarantees of specific dates except expectations – which expected dates may not be met if negotiations take longer.Advertisement

“Our position therefore, which we have communicated to the players, is that we remain committed to paying their November salaries at the earliest possible time, and the rest of what is owed them when our financial position improves.”
In August last year, the Zimbabwe cricketers had formed a union to participate in salary negotiations prior to the series against Pakistan. The board’s financial condition also resulted in Sri Lanka’s tour to the country in October being deferred.
The domestic competitions in Zimbabwe, scheduled to begin in November, were also delayed due to financial problems but the tournaments were finally held without any sponsors are believed to be seeking a $3 million loan from the International Cricket Council.
PROVISIONAL SQUAD
Brendan Taylor (captain), Sikandar Raza Butt, Tendai Chatara, Chamu Chibhabha, Elton Chigumbura, Michael Chinouya, Trevor Garwe, Tafadzwa Kamungozi, Kevin Kasuza, Timycen Maruma, Hamilton Masakadza, Shingi Masakadza, Tinotenda Mawoyo, Chris Mpofu, Tawanda Mupariwa, Natsai M’shangwe, Forster Mutizwa, Tinotenda Mutombodzi, Richmond Mutumbami, Taurai Muzarabani, Richard Muzhange, Tinashe Panyangara, Ed Rainsford, Vusi Sibanda, Prosper Utseya, Brian Vitori, Malcolm Waller, Sean Williams, Cephas Zhuwao.