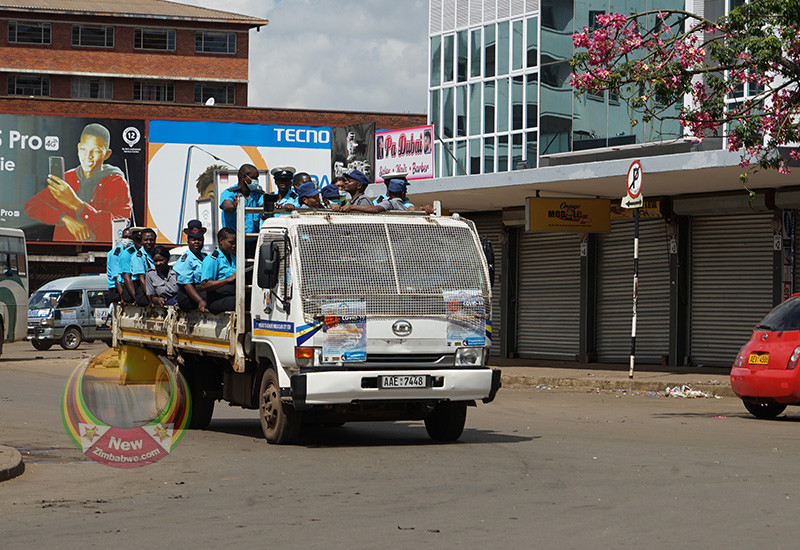 Immune to Covid-19?...ZRP and Harare Municipal Police crammed at the back of a truck
Spread This News

THE Zimbabwe Republic Police and the Harare Municipality were found wanting on Monday when their teams deployed to enforce government’s 21-day coronavirus lockdown period were seen violating recommended behavioural standards to prevent the spread of the deadly disease.

Both government and the World Health Organisation have recommended social distancing of atleast a mitre apart with the next individual coupled with face masks to prevent the spread of Covid-19.

However, it was business as usual for police and council employees who were having facial contact without anything to worry about.

Police also were having close contact with motorists irrespective of that the virus is spread faster through close physical contact.

Joint enforcement teams by regular police and municipal officers were seen packed in open trucks, chatting freely to each other.

Meanwhile, Harare Municipal street cleaners claim they have been forced by their bosses to clean up streets without protective clothing leaving them open to contracting Covid-19.

Some workers who spoke to NewZimbabwe.com on condition of anonymity said they had been threatened with unspecified action if they refused to perform their duties as usual.

“Council is just giving us an order to go to work but it does not care whether we have protective clothing or not,” said a worker.

“A few days ago, we raised the issue with management which lied to us that the President (Emmerson Mnangagwa) has given an instruction that we should proceed to work without protective clothing.

“Mr Chawatama (City Council director of works) wrote us a letter on Friday last week saying if we don’t go to work, we will be punished.”

A letter seen by this publication and said to have been authored by Engineer Chawatama to council street workers called the grumbling staff to order.

“The council is aggrieved that amongst yourselves are some workers who are protesting outside the law.

“This is happening regardless of the ongoing engagement in trying to sort out the protective clothing as one of your complaints.

“Those who fail to pitch up for work shall be punished,” reads part of Chawatama’s letter.

However, NewZimbabwe.com could not readily confirm the authenticity of the letter with city authorities.