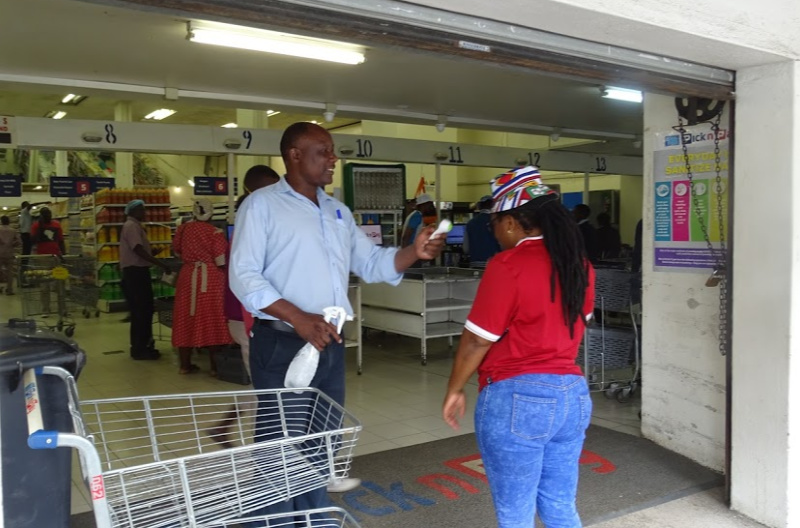 SOME supermarkets in Bulawayo have started screening their customers for possible coronavirus infection with those whose temperatures are higher than 37 degrees celsius being denied entry.

Retail outlets such as OK and TM were Saturday screening all clients at their entrances and those whose temperatures exceeded 37, 8 degree Celsius were not allowed in and were advised to see doctors.

“I wanted to buy a few groceries for my family,” said one of the clients who was turned away at a local supermarket.

“The gentleman manning the entrance said I could not proceed into the shop because my body temperature was above normal.

“They said I should go and see a doctor. Honestly, where do they expect me to see a doctor when hospitals are attending to critically ill patients only.”

The client, who refused to be named, said he was instead going back home in Pumula South to rest.

“I cannot do anything because even if I wanted to go to a private doctor, I do not have the foreign currency which they charge. I would rather go home and rest,” he said.

Another customer, George, who was also refused entry at another supermarket for similar reasons, said the most logical thing was to test all Zimbabweans for COVID-19 as opposed to discriminating them along body temperatures.

“They are scaring people by simply turning them away because one’s body temperature is high.

“There are a lot of things which cause one‘s body temperature to rise. Now, the impression which they are creating is that if one’s temperature is high, that person is a coronavirus suspect which in my view is not the case,” he said.

George urged the country to invest in testing machines.

High temperature and persistent dry cough are some of the symptoms of the disease.

Zimbabwe has so far confirmed nine coronavirus cases and one death with all cases done in Harare.