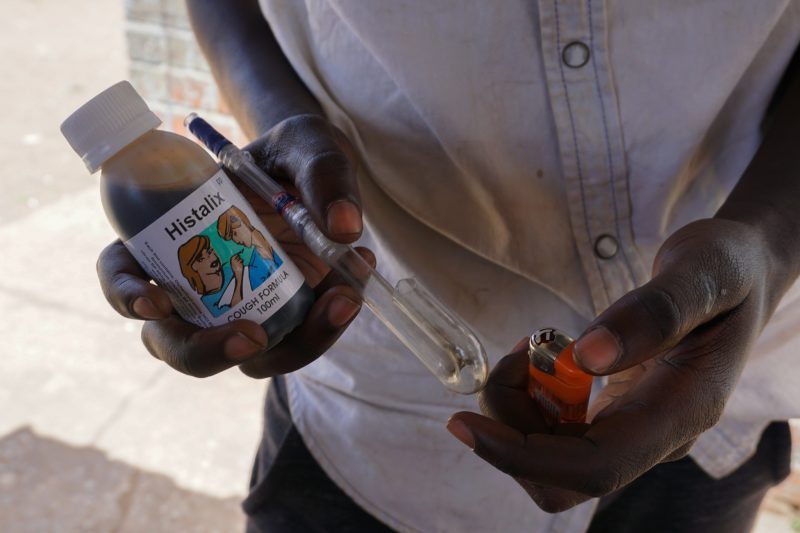 Nathan, 27, carries a glass pipe, made from a light bulb, for smoking crystal meth, along with a lighter and bottle of Histalix cough syrup
Spread This News

As LOCKDOWNS and job losses spur a spike in drug and alcohol use, a national coalition advocates for more affordable and accessible treatment programs.

Nathan, 27, carries a glass pipe, made from a light bulb, for smoking crystal meth, along with a lighter and bottle of Histalix cough syrup.

Farai starts her day by smoking a joint. A few hours later, the 34-year-old meets with friends for beers at a makeshift stall in Mbare, a high-density Harare suburb.

By evening, she has taken some of the other mind-altering substances for sale around her neighborhood: BronCleer, an illegal cough syrup imported from South Africa; Histalix, a prescription cough medication; or crystal methamphetamine, known locally as mutoriro.

A single mother of four who earns $2 a day selling samosas and beer, she recalls that she first tried marijuana at age 15 and gradually progressed to harder drugs. Her substance abuse and dependence have significantly worsened during the coronavirus lockdowns, however, which she attributes to anxiety and boredom as her meager business has dried up.

“It has now become a lifestyle because poverty has made me to find comfort in drugs,” says Farai, who is referred to by only her first name to protect her safety. “The money that I get for the upkeep of my children, I divert it to drugs because I cannot do without them… And there is no rehabilitation except being arrested and taken to prison or paying a fine.”

In a country of around 16.5 million people, Farai is among thousands of Zimbabweans struggling with addiction. In 2019, an estimated 180 people in the country died directly due to substance abuse disorders, a number that has nearly doubled in the last 20 years, according to the University of Washington’s Institute for Health Metrics and Evaluation.

The coronavirus pandemic’s impact on livelihoods and mental health has intensified the problem.

“There is no rehabilitation except being arrested and taken to prison or paying a fine.” Farai

In addition to drugs trafficked from neighboring Mozambique and South Africa, people have begun ingesting chemicals from TV tubes, industrial ethanol, and boiled diapers to get high, says Wilson Box, executive director of the Zimbabwe Civil Liberties and Drug Network (ZCLDN), an advocacy group founded in 2011.

Left untreated, drug addictions “trigger substantial costs to society including lost productivity, increased health care expenditures, costs related to criminal justice and to social welfare, and other social consequences,” according to a World Health Organization and United Nations Office on Drugs and Crime publication, “International Standards for the Treatment of Drug Use Disorders.”

On a global scale, the U.N. agency estimates that only 1 in 6 people seeking help has access to rehabilitation programs; across Africa, the number falls to 1 in 18.

In response, the ZCLDN has joined a government-led coalition of nonprofits, academics and law enforcement representatives to create a Zimbabwe National Drug Master Plan. Launched in December 2020, the five-year initiative aims to review existing policies, strengthen education and prevention efforts, and consider alternatives to fines and incarceration.

“We are also pushing for harm-reduction programmes and rehabilitation for drug users,” Box says.

In Zimbabwe, possessing, ingesting or cultivating illegal drugs is punishable by up to 15 years’ imprisonment.

Dr. Patience Mavunganidze, deputy director for mental health services in the Ministry of Health and Child Care, says people can seek help through support groups, municipal clinics or mental health institutions. At one of the few private rehabilitation facilities in Harare, a consultation and one-week stay costs $550; the average urban household only earned 15,805 Zimbabwean dollars ($187) in December 2020, according to the Zimbabwe Vulnerability Assessment Committee.

Nathan, a 27-year-old resident of Mbare who asked that only his first name be used for fear of being identified by police, says that he can’t afford private treatment options and has no desire to check himself into a mental hospital. He also fears prison, but says he managed to use $2 to bribe his way out of an arrest last year.

Of the $5 to $20 he makes per day as a “tout” — someone paid by bus drivers to recruit passengers — Nathan spends up to $15 on crystal meth, BronCleer and Histalix. On days when he falls short, his friends share what they have.

In 2019, his sister took him to Mozambique, east of Zimbabwe, to distance him from his suppliers. But civil unrest there prompted him to return in March 2020, he says. Soon afterward, movement restrictions intended to curb the spread of the coronavirus increased the peer-pressure effect, as people began to take their drugs more openly around family and neighbors.

“I had stopped, but when I came back during the lockdown, I started taking the trending drugs because of idleness and being surrounded with friends that are taking the drugs,” says Nathan, perched on a bench near the flat he shares with his grandmother.

The Zimbabwe Republic Police’s recent efforts to curb the crisis have included conducting more targeted operations and working with Interpol, South Africa and other countries to address trafficking across the region. A series of raids between January and April resulted in 1,508 arrests of “both peddlers and users,” says Assistant Commissioner Paul Nyathi, Zimbabwe Republic Police spokesperson.

Mass incarceration can’t solve Zimbabwe’s drug problem, however, cautions Dr. Lazarus Kajawu, a Harare psychologist who began treating patients in 1998. Back then, he says, his office would get a few marijuana users every week; now, he sees about a dozen patients a week, mostly between the ages of 17 and 21, who also abuse cough syrup, cocaine and crystal meth.

Noting the growing popularity of crystal meth, which is both highly addictive and life-threatening, Kajawu insists the country must focus on establishing more in-patient treatment programs.

“In order to make the person dry from drugs, you need to put them in a center where they cannot access drugs. So it’s very difficult, especially when you are treating them and they go back home where they know spots to get the drugs,” Kajawu says, adding that lockdowns have put people who are recovering from addictions back into close proximity with their suppliers.

“It’s high time policymakers focus on establishing rehabilitation centers because this is really a problem,” he adds. “Lack of willpower has resulted in lack of support.”

If she had access to an affordable treatment center that specialized in substance abuse, Farai says she would give it a try, in hopes of curing her addiction and winning back her family’s respect. But, she wonders, without a more encouraging economic outlook — during and after the pandemic — would she be able to stay clean and break the cycle?

“Maybe the government can assist me with a chicken-rearing project that can help me look after my children,” she says. “I do not want them to follow my path of using drugs.”