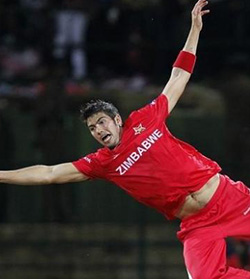 ZIMBABWE captain Graeme Cremer’s all-around performance couldn’t stop Sri Lanka’s dominance of the first test on Monday and the home team appeared headed for another defeat to mark its 100th match.
Spinner Cremer made a maiden test century with the bat to go with his four wickets, but Sri Lanka still led by 169 runs with 10 wickets in hand by stumps on the third day in Harare.
Cremer’s 102 not out – his first test score over 50 – saved Zimbabwe from the follow-on as it made 373 all out in response to Sri Lanka’s first-innings total of 537. By the close at Harare Sports Club, Sri Lanka was 5-0 in its second innings and holding a significant advantage.
Stand-in captain Rangana Herath and fast bowler Suranga Lakmal took three wickets each to maintain Sri Lanka’s control. Centuries by Kusal Perera and Upul Tharanaga set up Sri Lanka’s big first-innings score on the first two days.
It could have been far worse for Zimbabwe on Monday if not for Cremer’s stubborn hundred and 79 from wicketkeeper-batsman Peter Moor.