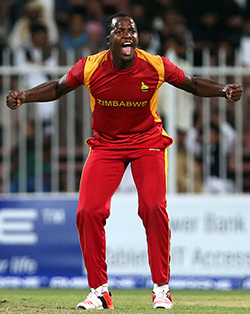 PACER Luke Jongwe and legspinner Graeme Cremer, who missed the 2016 World T20 due to injuries, are available for selection for Zimbabwe’s home series against India next month.
The two, along with Neville Madziva – who also missed the tournament in India, due to a thumb injury – are part of a 30-member practice squad.
Jongwe had sustained an eye injury while attempting a return catch during one of Zimbabwe’s practice matches ahead of the World T20 and was subsequently advised three to four weeks of rest by a neurosurgeon.
The bowler has been getting through his fitness drills well and has played practice matches, according to a release from Zimbabwe Cricket, but he is being monitored for potential symptoms nonetheless.
Cremer had sustained a fracture to his left hand during the same preparatory camp in Sharjah and has made “very good progress”, according to the team physiotherapist Anesu Mupotaringa.
The ZC release states that Cremer has been bowling an average of eight overs in a 90-minute session with “minimum discomfort” and, like Jongwe, has played practice matches.
Fast bowler Tinashe Panyangara had previously complained of pain in the lower back, but has since participated in the matches.
Batsman Chamu Chibhabha, however, suffered an injury scare when he was hit on the left arm during a net session. An X-ray ruled out fracture, and Chibhabha is receiving treatment for the injury.
He had his arm strapped during the team’s practice games.
The Zimbabwe squad has already played three 50-over practice matches and is currently on a week-long break. India will tour the country for three ODIs, from June 11, which will be followed by three T20 internationals, from June 18. All matches are scheduled to take place in Harare.Advertisement