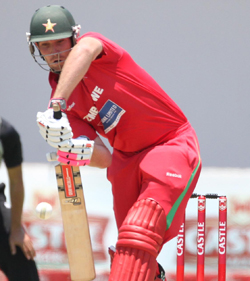 ZIMBABWE’S cricketers have agreed to end their boycott over unpaid wages and are returning to training after being promised money by next week, coach Andy Waller said on Monday.
Waller told AP that the national squad will gather on Tuesday for fielding practice and fitness tests after striking for two months over unpaid wages and bonuses and refusing to play domestic games.
The Zimbabwe cricket board’s financial problems also resulted in recent tours by Sri Lanka and Afghanistan being cancelled, but the board has reportedly secured a $US3 million ($A3.45 million) loan from the International Cricket Council.
Waller said players were guaranteed payment by next Monday. Zimbabwe Cricket’s leadership met senior players and a players’ representative on Friday.
‘‘Obviously I’m relieved that at least we can get on with the core business. We are starting training tomorrow (Tuesday) as a squad,’’ Waller said.
Zimbabwe are due to compete at the World Twenty20 next month, with their first game against Ireland on March 17.
‘‘We lost quite a substantial amount of time that we could have used to work on a few areas, but we’ve still got six weeks, which can give us plenty of time to prepare,’’ Waller said.
Zimbabwe cricket has been troubled by off-field issues for at least a decade, partly because of the country’s economic meltdown.
Players also threatened to strike ahead of a home series against Pakistan last year before deciding to play and beating Pakistan in a Test for the first time in 15 years.
Zimbabwe have not played an international game in any format since that victory over Pakistan in September, with the Sri Lanka and Afghanistan trips canned over the ongoing money problems.
Zimbabwe also recently turned down an offer to play a one-off Test against neighbour South Africa.
Before attending Friday’s meeting with the Zimbabwe Cricket leadership, captain Brendan Taylor said the team would still be competitive at the World Twenty20 as players had been training informally.
‘‘Also bear in mind that there were payment issues before we played Pakistan last year. We brushed them aside and won a Test match.
‘‘We are used to playing under these conditions. Besides, guys have been working hard individually behind the scenes. So it’s not like people have been idle. We’ve been working hard.’’Advertisement