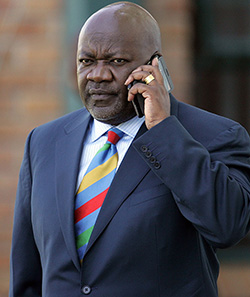 WILSON Manase, the former Zimbabwe Cricket (ZC) chairman, has been thrown a lifeline after the Administrative Court in Harare lifted his four-year ban from all forms of sports administration over his board’s decision to tour Pakistan last year with authorisation.
The Sports and Recreation Commission (SRC) last November handed Manase a four-year ban on charges of going ahead with the tour of Pakistan, which had not been sanctioned by the government-appointed SRC, the country’s supreme sport controlling body.
The SRC had declined to sanction the tour, citing safety reasons in the strife-torn Asian country, known for occasional terrorism attacks.
Zimbabwe became the first Test-playing side last June to tour Pakistan since March 2009 when gunmen attacked the Sri Lankan team in Lahore. This was followed by a tour boycott of Pakistan, which then became a no-go area for international sportsmen.
But six years later, in an attempt to present Pakistan as a safe sporting destination in the aftermath of 2009, the Pakistan Cricket Board invited Zimbabwe on a short limited-overs tour, which was meant to persuade other top cricket sides to follow suit.
The Pakistan government reportedly provided $1 million to go towards security alone for the duration of the tour.
The ZC board accepted the offer, which came with handsome financial rewards for the players and officials.
SRC, however, refused to authorise the tour. ZC went ahead.
After the tour, the SRC disciplinary committee, chaired by its board member Aisha Tsimba, found Manase guilty on charges of disregarding authority.
That judgment has now been quashed by Administrative Court judge Justice Herbert Mandeya, who ruled that SRC Manase erred by suspending Manase in his personal capacity, and without formal hearing.
“He was not charged with the offence,” read the judgement. “He did not plead to it. He was not invited to mitigate.”
Despite a suicide blast near the Gadaffi Stadium during one of the games, the tour went without incident, under heavy security.
Australian Dav Whatmore, Zimbabwe’s coach then, told a reporter later that “we experienced what Barack Obama might go through”.Advertisement