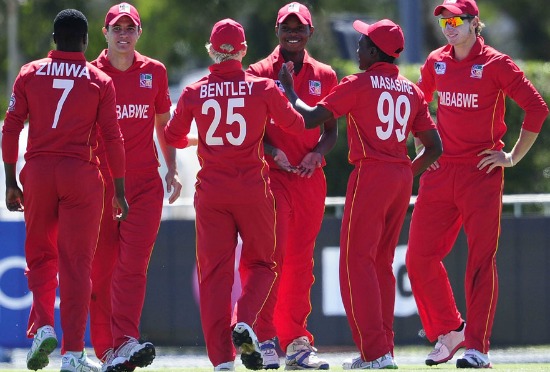 RELIEVED South African captain AB de Villiers has forecast Zimbabwe will cause upsets in the World Cup after his team upstaged its African rival in a nervy start to the tournament.
South Africa was indebted to a brilliant career best 138 not out by David Miller an JP Duminy’s unbeaten 115 for a commanding total of 4 for 339 on Sunday before restricting Zimbabwe to 277 all out in a 62-run win at Hamilton’s Seddon Park.
Miller and Duminy lifted the Proteas from a nervous 4 for 83 during a new one-day international record stand for the fifth wicket of 256.
“I am very happy at the performance, we had a really good game today,” said de Villiers as South Africa, bidding for a maiden World Cup title, made a winning start to their Pool B campaign.
But de Villiers warned Zimbabwe could upset one of the more fancied sides before the end of the tournament.
“They (Zimbabwe) played some excellent cricket and I will not be surprised if they upset a couple of teams in this World Cup,” the Proteas captain instead.
Reflecting on Sunday’s match, de Villiers said Zimbabwe had made the most of winning the toss.
“There is no doubt that played a good part in getting them ahead early on as it was a really difficult wicket to bat on in the first 15 to 20 overs.
“It got easier and luckily David and JP made full use of that and played exceptionally well in that great partnership that won us the game today.
“We have seen David demolish the attacks like that and he is capable of that,” said de Villiers, himself one of the most feared ball-strikers in world cricket.
“To see at this high level and in this biggest tournament is great and it shows where this guy is going in his career.”
De Villiers paid tribute to Duminy as well by saying: “JP also showed good form, he was a bit out of touch with his injuries but seeing him bat like that is very pleasing.”
In reply, Zimbabwe was cruising along nicely with Hamilton Masakadza (80) and Chamu Chibhabha (64) adding a brisk 105 runs for the second wicket to give South Africa a scare.
But leg-spinner Imran Tahir dismissed both Chibhabha and Masakadza to finish with 3 for 36 in his 10 overs, a feat De Villiers said was exceptional.Advertisement

“Imran did well right from when he came to bowl, but yes right throughout the game I felt pressure and in most games I played you know you got to get the wickets to win.”
De Villiers said he would only start to think about South Africa’s next game – against defending champion India on Sunday – after a few days’ rest.
“We have two days off, we will spend a bit of time in Melbourne and have some fun with the guys and get away from the game,” said de Villiers.
“My wife is coming and a lot of families are coming and we will start to focus on the next game come Wednesday when we have our first practice session in Melbourne.”
Meanwhile de Villiers clarified comments he was ‘tired of cricket’ by insisting it was watching the game, not playing it, that sapped his energy.
“I’m staying away from watching the game, but I am not tired guys, I love the game, I just want to stay away from watching other games and following commentary and news because it tires me,” he said.