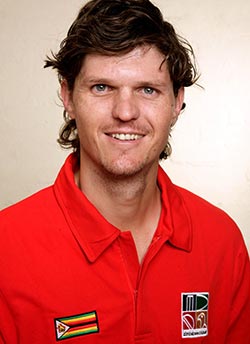 ZIMBABWE has named a 25-man training squad for the forthcoming South Africa tour with Mark Vermeulen making his return to the squad, six years after setting fire to the national union’s headquarters.
Vermeulen was cleared in a court in 2008 despite admitting setting fire two years earlier to the union offices at the Harare Sports Club Test venue and an academy pavilion at another location.
The batsman successfully argued that at the time he set the fires at the two buildings he was suffering from problems related to epilepsy caused by being hit on the head by a ball during a game.
The 35-year-old Vermeulen’s recall came after he recently made a century for Zimbabwe A against Afghanistan.
He played the last of his eight Tests in 2004 but made a brief comeback to the ODI team in 2009.
Vermeulen was joined by six uncapped players in Mangongo’s first squad since taking charge.
They are Taurai Muzarabani, Steven Chimhamhiwa, Luke Jongwe, Cuthbert Musoko, Neville Madziva and John Nyumbu.
Batsman Brendan Taylor will captain the Zimbabwe team in the Test and all-rounder Elton Chigumbura will lead the ODI team.
The South Africans, ranked number one in the world in Tests, arrive in Harare on Wednesday for a one-off a Test against Zimbabwe at Harare Sports Club.
It will be new coach Stephen Mangongo’s first examination since taking over from Andy Waller last week.
The Test will be followed by three One Day Internationals and a triangular series against Australia, who also named their squad on Monday.
ZC said in a statement: “The Proteas will tour Zimbabwe from the 6thof August to the 7th of September, as a busy international period for Zimbabwe cricket continues.
“South Africa will arrive in Harare just after mid-day on Wednesday, for the tour that begins with a one-off Test match at Harare Sports Club starting on Saturday.
“The tour will then move to the Queens Sports Club in Bulawayo for three One-Day International (ODI) matches. These will be on the 17th, 19th and 21st of August.
“After that, Zimbabwe and South Africa will return to the capital city to join Australia for a triangular ODI series at Harare Sports Club.
“The three sides will play each other twice, and the top two teams after that will meet in the final at the same venue on the 6th of September.Advertisement