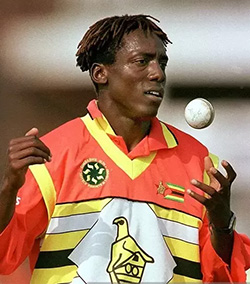 HARARE: When two Zimbabwe cricket players, one black and one white, staged a daring protest against the regime of Robert Mugabe at a World Cup game 14 years ago, they knew it would probably end their careers at home and maybe even put their lives in danger.
At the 2003 cricket World Cup, with TV cameras beaming the action live to the world, Henry Olonga and Andy Flower walked out at a stadium across the road from Mugabe’s offices in Harare wearing black armbands taped over the sleeves of their red Zimbabwe shirts. It was to mourn what they called “the death of democracy” in their country under Mugabe.
The surprise act of rebellion at the first World Cup game in Zimbabwe — even teammates had no idea what Olonga and Flower had secretly planned to do — gave the hardships of ordinary Zimbabweans international exposure and publicly embarrassed Mugabe.
Olonga, the first black man to play for Zimbabwe, was ostracized by cricket officials loyal to Mugabe and hounded by death threats. He and Flower never played for Zimbabwe again after the World Cup and, fearing more serious repercussions, left their home country.
At the age of 26, Olonga’s cricket career was over and he had to start again from scratch in a new country. He always knew that was probably going to happen.
What Olonga, a cricketer by day and singer by night, couldn’t have known is that a patriotic song he first recorded in a small bedroom, and which was banned on TV and radio after his protest, would become the soundtrack of change in Zimbabwe when Mugabe was finally forced out more than a decade later.

Olonga’s song “Our Zimbabwe” has been playing regularly on national television, once the mouthpiece of Mugabe, over the last two weeks, both in the days leading up to and since Mugabe’s resignation last Tuesday. Calling for Zimbabweans to unite and stand up for their country, it’s become a kind of unofficial national anthem embraced by joyous Zimbabweans at the end of Mugabe’s 37-year rule.
It’s taken nearly 15 years, but Zimbabwe is listening to Olonga’s song again.
“I was pleasantly surprised to hear that the people of Zimbabwe have embraced the song and that ZBC (the Zimbabwe Broadcasting Corporation) has been playing it as events unfolded in Zimbabwe,” Olonga told The Associated Press in an interview from Australia, where he’s been living in exile. “It is very humbling for all of us involved.Advertisement

“It stands as a challenge to each and every Zimbabwean to embrace their part in making a stand for their country. Judging by events that occurred recently, I think Zimbabweans are finding their voice and have done just that.”
The song’s lyrics reflect the current mood of Zimbabweans, yearning for change from repression and desperate economic struggles under Mugabe: “We’ve been through it all, we’ve had our days, we’ve had our falls,” sings Olonga in the 2001 music video as he looks over the Zimbabwean countryside from the top of a hill. “Now the time has come for us to stand, to stand as one.”
The song was conceived and first recorded “in a little bedroom studio in Harare,” Olonga said. It was first released 16 years ago, “but I hope its essence has stood the test of time,” he said.
Olonga’s decision to stand up against Mugabe had serious ramifications for him. Flower, eight years older, had decided he would retire from international cricket after the World Cup anyway, and had a contract with a team in England to go to. He went on to become coach of England, one of the biggest jobs in cricket.
But because he was black, Olonga’s act was viewed as especially treacherous by the government of Mugabe, Zimbabwe’s first leader after the end of white minority rule in 1980 and once a respected veteran of Africa’s liberation movement. Mugabe’s government wanted to try Olonga for treason. He spent some time at a safe house before fleeing to Britain. He eventually settled in Australia, where he now lives with his wife and children. He released an album “Aurelia” in 2006 and his 2010 book “Blood, Sweat and Treason,” an autobiography, was shortlisted for a major award.
Although his cricket protest was incredibly brave, Olonga prefers to talk about his song as a lasting inspiration for Zimbabweans, especially in the task of rebuilding now after Mugabe. The song also reflects his own life journey, with the second verse: “Though I may go to distant borders, my heart will yearn for this my home, for time and space may separate us and yet she holds my heart alone.”
Olonga, now 41, hasn’t set foot in Zimbabwe since he left, in a hurry, in 2003. It might finally be time to return.
“The true litmus test going forward is whether each Zimbabwean will heed the call and play their part,” he said. “I know I will if the opportunity arises.”