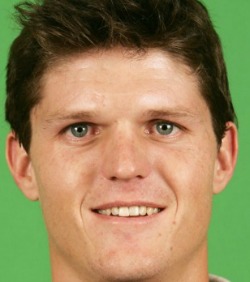 ANOTHER poor outing and another series loss against Afghanistan led to off-the-field repercussions for hosts Zimbabwe, this time.
Their defeat inadvertently pitted some of their former cricketers against each other on the social networking sites.
Former captain Brendan Taylor, who had retired immediately after the 2015 World Cup and signed a Kolpak deal with Nottinghamshire, hit out at former Zimbabwean cricketers Stuart Carlisle and Mark Vermeulen.
Taylor and Vermeulen were involved in a social media spat over the current national side’s dismal performances against Afghanistan, after the latter apparently criticised the current lot of players — an act that irked Taylor.
On Sunday, Zimbabwe were bowled out for a paltry 54 in 13.5 overs while attempting to chase down 161 in 22 overs in the rain-curtailed the fifth and final ODI in Harare.
The series was levelled at 2-2 before the match. Zimbabwe, after winning the third and fourth ODIs, were making a comeback in the series, and were expected to do well.
But the defeat and its margin sparked outrage among several former cricketers, leading them to slam the current side. Taylor then took to Facebook to defend Zimbabwe’s performance and criticised former players and commentators by saying they sometimes “forget how tough it can be in the middle”.
However, Vermeulen was not impressed with Taylor’s defence of the national team. He mentioned being disappointed with Taylor for supporting a “pathetic effort by our national team”. “If I was in the team that was bowled out for 54 I would be embarrassed and would just shut the f**k up and get in the nets,” commented Vermeulen.
An agitated Taylor in turn replied to Vermeulen’s post: “I’m sure the guys are first to admit this was a poor performance … But it’s sh*t from you who majority of the time sit back and criticise the players, Zimbabwean Cricket and the country as a whole … Take a good look in the mirror on what you have done for yourself and your country, apart from burning down one of the few establishments we had along with the poor development players that lost everything in their bags that day. Didn’t hear any apologies from you, have we, Rex? You my friend are what a true embarrassment looks like.”
Things got nastier. Vermeulen hit back: “They all got what they deserved and let me catch you one day … we’ll settle this … be careful what you say about me, you little f**k.”Advertisement

Taylor then shared the argument between the two on Twitter calling Vermeulen a psycho: “Unfortunately @ZimCricketv did produce the most psycho player ever to grace the game. Definitely got a kill in him does Mark.”
Taylor compared Carlisle’s comments with his career statistics. He, however, later removed the post from his official Facebook page.
Vermeulen is infamous for his controversial behaviour off the field. He was convicted with arson in 2008 after setting fire to two Zimbabwe cricket buildings. He was let go on grounds of mental illness.
He was also banned from playing in English League cricket for 10 years for hurling the ball at a group of fans after they had apparently teased him in 2011. The court later found Vermeulen had been suffering from serious psychiatric problems since he was struck on the head by a ball by Irfan Pthan while batting in a match in 2004.
Vermeulen played 9 Tests and appeared in 43 ODIs for Zimbabwe. The injury had kept him out for a decade before he made a brief comeback in 2014. Taylor, who retired in 2015, had a longer and more successful career for Zimbabwe, where he played 23 Tests and 167 ODIs for the national team.