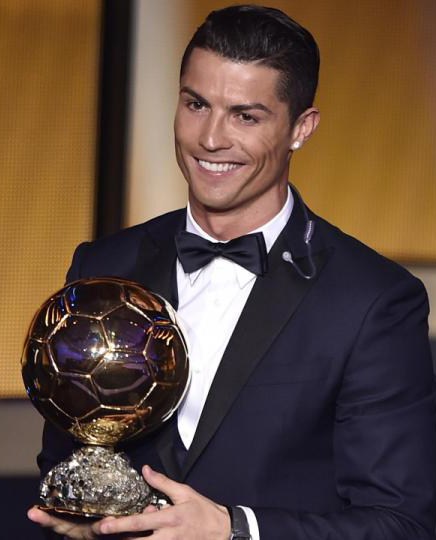 REAL Madrid star Cristiano Ronaldo retained his Ballon d’Or crown, fending off competition from Barcelona forward Lionel Messi and Bayern Munich goalkeeper Manuel Neuer.
Ronaldo, who was overwhelming favourite, added to his triumphs in 2008 and 2013 after taking 37.66 per cent of the vote.
“I would like to thank all of those who voted for me,” said the 29-year-old, who struggled to fight back tears as he accepted the trophy.
“It has been an incredible year. I would like to continue the work that I have done so far. I want to try to improve, to become better as each day goes by.
“I never thought that I would bring this trophy back home on three occasions and I want to win it again. I want to become one of the greatest players of all time.”
Ronaldo, who has made a point of displaying his rippling muscles in his goal celebrations, then bellowed “Sim” (yes) into the microphone, somewhat startling the ceremony presenter.
Ronaldo helped Real Madrid end their hunt for an elusive Decima – a 10th Champions League crown – starring as they thrashed Bayern Munich in the semi-finals before notching a late penalty against Atletico Madrid in the final.
The Portuguese forward netted 51 goals in 47 appearances last season, including a record-breaking 17 goals in the Champions League.
Since then, he has added the Club World Cup title to his collection, has scored a stunning 26 goals in 17 La Liga matches and looks set to smash the biggest total for a season in Spain’s top flight of 50 scored by Messi in 2011-12.
All that was enough to overlook a disappointing World Cup where Portugal went out in the first round and Ronaldo mustered only one goal.
However, he still became Portugal’s all-time leading scorer and his goal haul for his country stands at 52 in 117 appearances.
Messi, by contrast, inspired Argentina as they reached the World Cup final, where they lost to Neuer’s Germany.
The award has turned almost turned into a personal duel between Ronaldo and Messi.
Messi won four years in a row from 2009 to 2012, with Ronaldo finishing second on three occasions. Only Andres Iniesta, runner-up in 2010, has managed to break the duopoly.Advertisement