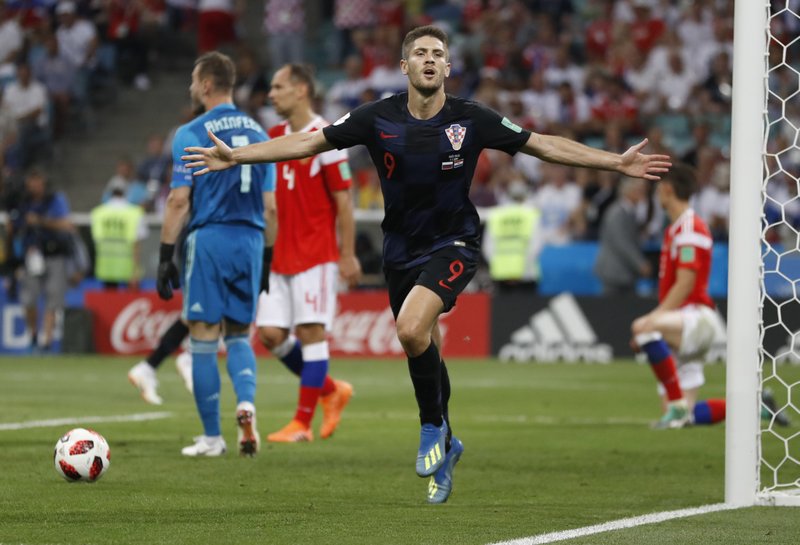 Although Russia made it further at this year’s World Cup than most anyone expected, it was Croatia that advanced to the semifinals with a 4-3 shootout victory Saturday following a 2-2 draw.

The overachieving hosts, the lowest ranked team in the tournament at No. 70, were trying to make it to the World Cup semifinals for the first time since the Soviet Union finished fourth at the 1966 tournament in England.

Even Russian President Vladimir Putin was taken in by the host nation’s surprising run, at least according to Russia coach Stanislav Cherchesov.

“Putin called me during the day, and he called me right now,” Cherchesov said. “He congratulated us on a very good game. He said what we showed on the field was great. I told him we were disappointed. He said we should have our eyes open and make the next steps.”

The Croats hadn’t advanced to the semifinals at the World Cup since 1998, when the country made its first appearance. Croatia will next play England in the semifinals on Wednesday in Moscow.

With the crowd silenced following an extra-time header from Croatia defender Domagoj Vida in the 101st minute, Russia defender Mario Fernandes scored with his own header in the 115th to send the match to yet another penalty shootout.

Fernandes, who was born in Brazil but rejected a chance to play for that country’s national team in 2011, sent his penalty kick wide of the net in the shootout, giving Croatia the advantage.

Both goalkeepers made early saves in the shootout, with an injured Danijel Subasic stopping the opening shot from Fyodor Smolov. Igor Akinfeev later blocked an attempt from Mateo Kovacic.

At 1-1, Fernandes missed his shot — only the second player to miss in any of the four shootouts at this year’s World Cup.

The teams then traded two scores each before Ivan Rakitic calmly converted the winning penalty.

“We should have finished the job before penalties but maybe it’s written in the stars we have to go through the extra drama,” said Luka Modric, whose penalty bounced off Akinfeev’s hand and the post before entering the other side of the net.

Denis Cheryshev gave Russia the lead in regulation time with a long-range shot into the upper corner in the 31st minute. Croatia equalized with Andrej Kramaric’s header near halftime.

“I left everything on the field and unfortunately we were unlucky,” Russia midfielder Roman Zobnin said. “We gave everything we could.”

It was the second straight time both teams played in a penalty shootout. Russia beat Spain 4-3 and Croatia defeated Denmark 3-2 in the round of 16.

Argentina in 1990 had been the last team to win consecutive World Cup shootouts. The defending champions at the time defeated Yugoslavia in the quarterfinals and Italy in the semifinals that year, which also made Italy the last host nation to lose on penalties before Saturday.

“It wasn’t a beautiful game, but it was a battle,” Dalic said. “We were lucky. I was concentrating throughout the match, but after that penalty it came bursting out of me.”

Modric and Rakitic were decisive in the shootout but didn’t play up to expectations in regulation and extra time, unable to create many significant chances for Ivan Perisic and Mario Mandzukic up front.

Both players were beaten by Cheryshev in the play that led to the opening goal for the Russians.

Cheryshev was Russia’s leading scorer at the World Cup with four goals. He converted the final penalty for Russia in the shootout against Spain, as well as the winner against Egypt and a pair of goals in the opener against Saudi Arabia in the group stage.

Many fans gave him a standing ovation when he was taken off in the second half.