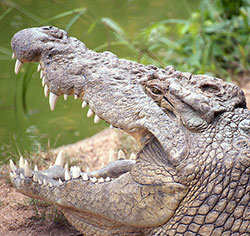 ONCE of Zimbabwe’s largest crocodile breeders, Binga Crocodile Farm, is expanding capacity by 20 percent to meet demand for meat and other products in the European market, an official said on Monday.
Operations manager Antony Sheren told The Source that the company was constructing new dams and ponds for breeders to increase its capacity to 25,000 reptiles.
“We are currently looking at increasing our carrying capacity from 20,000 to 25,000 reptiles a cycle, which ranges between one and two years,” he said.
The expansion would allow it to consolidate its markets in Europe and Namibia, he added. The farm exports crocodile skins and meat to the EU, mainly Belgium where it secured a contract to export three tonnes of the meat per month in 2012.
“As we expand we are looking to increase our exports too,” said Sheren without giving details.
The farm started operating in 1964 as a crocodile egg collection unit but was bought by private investors who have pumped in more than $1.5 million in the last five years to expand its scope and production.
The main operations now include breeding crocodiles for meat and skins, which are mostly exported.
Crocodile products are in high demand in Asian and European countries and it is estimated that Zimbabwe earns more than $100 million annually from the export of meat and skins to countries such as Japan, Singapore, the United States and Australia.Advertisement