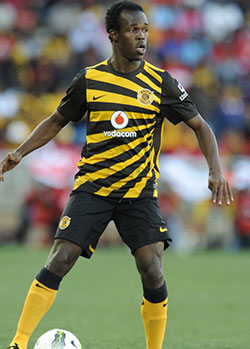 KAISER Chiefs striker Knowledge Musona has been ruled out of Saturday’s PSL clash against arch-rivals Orlando Pirates at FNB Stadium.
The Zimbabwean international will miss the Soweto derby because of a shoulder injury sustained in Chiefs’ Telkom Knockout win over Free State Stars last weekend.
Chiefs coach Stuart Baxter, however, has passed winger Siphiwe Tshabalala fit to take the field for Amakhosi in the country’s premier soccer fixture.
“We’re not even bothered with any late fitness tests for Musona… he’ll be out,” Baxter said on Thursday.
“There is severe damage and it’s not looking that good. Now I’ll wait for the doctors who will tell me how long he will be out for.
“‘Shabba’ (Tshabalala) has trained with the team for the last two sessions, so he’s definitely fit for selection from his ankle injury.”
The main focus this week has been on Pirates, after their superb Caf Champions League run, where the Sowetans booked their spot in the competition’s final.
The Buccaneers are in search of a historic second continental triumph following their success in lifting the trophy in 1995.
Despite the gruelling traveling and playing schedule, Pirates coach Roger de Sa said his charges were well prepared for the epic clash.
The Sea Robbers have played just two Premiership games since the campaign started in August because of cup commitments.
Pirates were runners-up in the domestic MTN8 final last month, and two days after returning from Tunisia earlier this week, they beat Golden Arrows 4-0 to move on to the Telkom Knockout semi-final stages.
“We have to take it game-by-game and be calculative and just not get carried away with things,” De Sa said.
“Our heavy schedule will have its pros and cons, we just have to keep going and give it our all in every fixture we face.”
The side’s defender Happy Jele will retain the captaincy for the highly-billed fixture, while regular captain Lucky Lekgwathi continued being side-lined.Advertisement