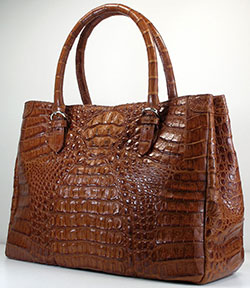 CROCODILES are some of the most feared predators in Africa, ruthless reptiles renowned for tearing their prey to pieces before swallowing hunks of meat raw.
But in the baking sun at Nyanyana crocodile farm on the shores of Zimbabwe’s Lake Kariba, feeding time has a surreal edge as the beasts nibble lazily at bowls of vegetarian pellets.
Besides being cheaper than meat, the diet of protein concentrate, minerals, vitamins, maize meal and water is said to enhance crocodile skin destined to become handbags or shoes on the catwalks of New York, Paris, London or Milan.
“We don’t feed them meat anymore,” said Oliver Kamundimu, financial director of farm owner Padenga Holdings.
“It actually improves the quality because we now measure all the nutrients that we are putting in there, which the crocodile may not get from meat only,” he told Reuters in an interview.
Four hundred kilometres northwest of Harare, Nyanyana is home to 50,000 Nile crocodiles and is one of three Padenga farms around Kariba, Africa’s largest man-made lake.
The company has 164,000 crocodiles in all and started feeding pellets in 2006 at the height of an economic crisis in Zimbabwe that made meat scarce and very expensive.
Initially, the pellets contained 50 percent meat but that has gradually been phased out to an entirely vegetarian diet.
“We have moved gradually to a point where we reduced the meat to about 15 percent then to seven percent and where we are now there is zero meat, zero fish,” he said.
“It’s a much cleaner operation and the crocs are getting all the nutrients they want from that pellet.”
Fed every second day, the crocodiles are largely docile and lie asleep in their enclosures as workers walk around casually cleaning up leftovers.
Hermes, Gucci
The crocodiles are slaughtered at 30 months, when they are about 1.5 metres long and their skin is soft and supple.
Last year Harare-listed Padenga sold 42,000 skins to tanneries in Europe, especially France, where the average skin fetches $550.
Ninety percent of the leather becomes high-end handbags, Kamundimu said, while the remainder makes belts, shoes and watch straps for some of the biggest names in world fashion.
“When you hear names like Hermes, Louis Vuitton and Gucci – those are the brand names we are talking about,” he said with a satisfied smile.Advertisement

Having survived economic collapse and hyperinflation of 500 billion percent in Zimbabwe, Padenga then had to deal with fallout from the 2008 global financial crisis, and economic contraction in the euro zone, its main market.
However, while appetite for crocodile meat cooled in Europe and Asia, super-wealthy European shoppers shrugged off recession and continued to snap up crocodile-skin items, Kamundimu said.
“When you look at people who buy handbags for their wives or daughters that cost $40,000 a piece, even when the euro zone problems came, they could still afford to buy,” he said. We didn’t feel a decline.”