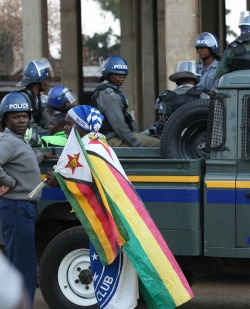 ZIMBABWE’S African Nations Championship (CHAN) clash with Zambia scheduled for Rufaro Stadium on Sunday was called off after Cameroonian match officials failed to arrive.
The kick-off had been pushed back to 4PM after the referees told the Confederation of African Football they were stuck in Nairobi, Kenya, late on Saturday.
Scores of fans were sold tickets and allowed into the stadium and waited for the two teams to walk out in vain.
Although Rufaro Stadium has a public address system, no information was given to the fans who only learnt of the cancellation from their radios and friends at home who had the benefit of a statement issued by ZIFA CEO Jonathan Mashingaidze.
Mashingaidze said the match had been rescheduled to next Sunday.
Last week, ZIFA wrote to CAF expressing their uneasiness at having the quartet of referee Aurelien Juenkou, Fuanta Joseph Lambi, Elvis Noupue and Christopher Nde to handle the CHAN match.
Mashingaidze had expressed concern that the move to bring match officials from far afield would worsen their financial plight.
The association was forced to refund the more than 400 Zambian fans who had bought US$10 tickets and advised the local fans to hold onto their “full tickets” which are valid for the rescheduled match next Sunday.
ZIFA communications manager Xolisani Gwesela said the fans would have to use the same entry points they had bought their tickets for the rescheduled match.
“It’s unfortunate, but there is nothing we can do for those who will have lost their tickets,” said Gwesela.
Last week, a fire gutted Jomo Kenyatta International Airport in Nairobi but still the Kenyan Airways flight arrived on Sunday minus the match officials from Cameroon.

Backing the Warriors … Fans line up to get into Rufaro Stadium