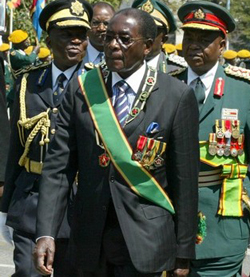 AS the internecine factional squabbles continue to tear the revolutionary Zanu PF party into smithereens, with the police ironically turning their button sticks and water cannons from opposition activists to war veterans, I am desperate to glance at my political rear view mirror to ruminate how we got into this political quagmire.
Hate it or love it, Zanu PF and its parent party Zapu played a central and determinant role in the liberation struggle and the subsequent birth of a new nation they proudly renamed Zimbabwe. What is intriguingly astounding however is how a national project to liberate a nation has deteriorated into a selfish fight to establish a political dynasty devoid of any semblance to the nationalist ideals of the founding fathers like Joshua Nkomo, Hebert Chitepo, Magamba Tongogara, Ndabaningi Sithole and others?
How did the struggle for Zimbabwe deteriorate into a narcissist scuffle to create a Mugabe hegemony? It is my contention in this piece that the writing has always been on the wall that the revolution would culminate into nothing but a personal project.
The divided Patriots.
In 1980, after executing what is perhaps the most successful liberation struggle in Southern Africa, Zanu and Zapu, decided to go into the first one-man one-vote plebiscite as separate parties, dangerously divided on tribal fault lines. Tellingly, both parties claimed to be a Patriotic Front as revealed by their desperate clinging on to the PF prefix but the ideals of how to build a patriotic nationhood were at that early stage already sacrificed to a perilous political game of power and control.
The first majority vote became a winner-take-all lottery and the winner was quick to claim his spoils and vanquish the losers, and with that, the project to build a successful nation together got lost to political ambition and greed. Salisbury became Harare and Harare became ‘’bambazonke’’, take all or take everything.
Bulawayo, then an industrial hub, slowly crumbled from a City of Kings to a thirsty ghost town. Today, every main street in every city and town is now a Robert Mugabe way, epitomizing how a project to build a nation has been reduced to a selfish and narcissist endeavor that is aptly encapsulated in the slogan ‘VaMugabe Chete!’ Advertisement