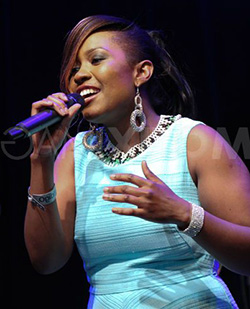 AWARD winning songstress, Cynthia Mare, turns a milestone in her music career when she launches her third album at 7 Arts Theatre in Avondale, Harare this Friday.
Titled ‘Shinga’, the album comes after her debut offering ‘Summer Love’ which she released in 2011 during her stay in the United Kingdom before dropping her second project ‘Songs My Mother Loved’ in 2013.
What makes Friday’s launch unique is that it will be broadcast live on Zimbabwe Television (ZTV) and on some Zimbabwe Broadcasting Corporation (ZBC) radio stations.
This will probably be the first time that an album launch in Zimbabwe will be beamed lived both on TV as well as on radio.
“It will be fireworks at the 7 Arts Friday. The line-up is great and there will be a red carpet event where artists will come through on the red carpet in style,” said Mare in an interview with NewZimbabwe.com.
Mare is expected to belt out songs on the new album during the launch, which will be graced by various supporting artistes such as Victor Kunonga, Ammara Brown, Hope Masike, Sabastian Magacha, BaShupi, Tytan and Donald Kanyuchi.
Ironically, Tytan doubles up as her manager while Kanyuchi – who was groomed by music legend Oliver Mtukudzi – is one of her guitarists.
While there will be live musical performances, the host Clive Chigubhu, will keep the audiences in stitches with his rib-cracking jokes, while Star FM’s Zaza will also add to the fun.
Inspirational
Speaking ahead of the launch, Mare described “Shinga” as “inspirational”.
“The title track from this album, Shinga is a song telling someone to be strong and to remember that they are not alone.
“It is in a way related to one of my previous songs ‘Zuva Rimwe’ which I dedicated to my late mother who passed away in 2011.
“However, ‘Shinga’ goes an extra mile in giving hope to the hopeless and giving them strength in the face of adversities.
“I aim to inspire, empower and encourage people through my music,” she said.
Apart from Shinga, some of the songs she is expected to perform at the launch include “Waita Mari”, which is a Jiti song, “Muchato”, “Ngoro” and “Nhamo”, among others.
Recorded at Jah Prayzah’s newly-established studio based in Belvedere, the album shows maturity on the part of the artiste.Advertisement

“I have since moved from R&B to Afro-fusion since I want to be identified more with home which is Africa, Zimbabwe in particular.”
The decision to come back home was not an easy one but the sickness of her mother and eventual passing on in 2011 changed her mindset.
“In the UK I was working as a paediatric nurse but because of the passion for music I returned home,” she said.
Cynthia Mare: Zuva Rimwe, Dai Zvaibvira