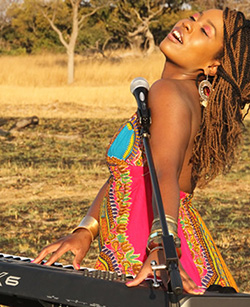 MULTI-AWARD winner Cynthia Mare was recently endorsed as the face of Zimbabwe’s leading internet service provider, ZOL.
The development means the silky-voiced Mare scoops her second major endorsement deal barely two years since her return home from the UK.
She, last April, named brand ambassador for leading local smartphone company Gtel Zimbabwe.
In an interview this week, the afro-fusion diva was happy to be associated with the ZOL brand.
“I am very happy. I love ZOL not only is their service great, it’s also cool and vibrant and we can look forward to a great thing coming from ZOL,” said Mare.
Although she could not disclose the value of the endorsement, the Zuva Rimwe hit-maker said she would be helping ZOL to promote their products.
In addition to endorsement deals with a number of companies, Mare also works with several non-governmental organisations.
Her latest offering Moto Ngaubvire, which seeks to empower females, also got her a deal with World Education Incorporated Bantwana on their campaign against gender-based violence.
The songstress is also a brand ambassador of Black Things African Wear and had a short stint on ZTV’s Coke On The Beat before leaving to concentrate on her music.
Earlier this month, she walked away with the National Arts Merits Awards’ Outstanding Female Musician accolade.Advertisement