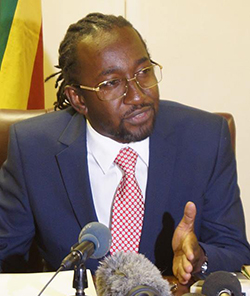 THE Confederation of Zimbabwe Industries (CZI) says government must urgently engage the business sector to consider their input on the proposed 10% empowerment levy before it is implemented.
Indigenisation minister Patrick Zhuwao has given foreign-owned companies up to March 31st to comply with the indigenisation laws or remit a 10% of their annual income to the empowerment levy in the first year and 12,5% the following year.
Under the country’s economic empowerment laws, foreign companies must localise control and ownership of at least 51 percent of their Zimbabwean operations.
The levy, according to Zhuwao, is part of measures to raise internal resources for the indigenisation programme and would be distributed through community share ownership schemes.
Speaking at a business meeting in Harare last week, CZI official Jimmy Psillos said they are not opposed to the proposed levy but need time to engage and find common ground with the government.
“We would want to engage the minister in terms of the levy and to see how it can work for everybody because we understand his objectives which are to make sure that businesses comply and how can we do that to create a win, win situation which we need for Zimbabwe,” he said.
CZI members at the Harare meeting threatened to resist Zhuwao’s imposed levy.
“In all fairness, I think there is no elephant in the room.
“We are all Zimbabweans; we know what the law says and I just want to encourage the minister and say just unpack your law so that it is clear for everybody to implement without undue pressure,” said an unidentified businessman.
Another delegate said the proposed 10% indigenisation levy was too harsh.
“10% needs to be engaged with the minister. It does not matter what he has said, he is a stakeholder like us. The engagement process must be the manner that meets government interests and the private sector.”
Responding to the business concerns, Zhuwao insisted that there was no room for negotiation.
“Let us not go back to the narrative about whether I should not implement that legislation, I am actually implementing it,” he said.
“So let talk about how do we make sure that I implement it in a manner that assists every stakeholder.”Advertisement