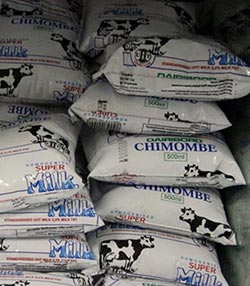 FOOD processor Dairibord Holdings has reported a $1,7 million loss for the full year to December 31, 2013 from a $7,1 million after tax profit in the prior year as volumes declined under pressure from cheaper imports.
Revenue was down six percent to $100 million on the back of declining volumes while the company reported $4,6 million in impairments for plant, equipment and inventories.
Chief executive, Anthony Mandiwanza told an analysts briefing last week that the company is looking to rebound and will this year commit $10 million in capital investment for plant and equipment to increase capacity and efficiencies.
It will expand capacity at its sterilized milk, ice-making unit and bottled water plants.
He said the group had invested $21.6 million between 2009 to 2013 in capital equipment.
Net cash generated from operations increased to $5.9 million from $5.3 million in 2012.
“At the end of the year, the group secured a $6 million loan facility from PTA Bank with a tenure of five years at an “all in cost” of 10.3 percent,” Mandiwanza said.
Dairibord produces 40 percent of Zimbabwe’s annual raw milk , which at  54.7 million litres last year was 20 percent of the all-time peak of  256 million litres achieved in 1991.
Mandiwanza said the group had generated $1 million in revenue through a toll arrangement for its Chimombe brand.
The group incurred $800 000 in retrenchments costs after shutting three local factories, cutting 240 jobs in the process.
“We want to further reduce the factories to three and have a staff complement of 1,495 by year end,” Mandiwanza said.
The cost of producing milk in Zimbabwe was higher at 64 cents per litre compared to 40 cents and 44 cents in South Africa and Zambia, he said.
Going forward, Dairibord will add 200 heifers in the year which would increase milk output by 100 million litres, Mandiwanza said.Advertisement