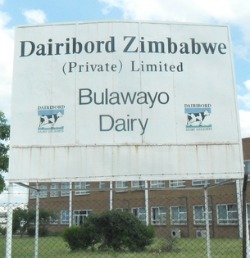 LISTED milk processor Dairibord Holdings has warned that profits over the period to the end of June would be lower than the same time last year as it also emerged the group had joined the race to acquire the stricken Cairns Holdings.
In a statement Wednesday, the management said operational challenges had undermined the group’s financial performance with income expected to be lower that the US$1.9 million net profit archived over the same period last year.
“The group results for the half year ending June 30, 2013 will reflect operational challenges encountered due to the plant and staff rationalisation projects, escalating costs and liquidity challenges in the market,” the management said.
The company’s shares on the Zimbabwe Stock Exchange (ZSE) subsequently fell 13 percent to close at 25c on Wednesday with volumes fairly strong at 200,000.
Group performance in the first quarter was also flat with turnover increasing marginally to US$24.3 million from US$24.2 million the previous year.
Meanwhile, the company has been shortlisted for the possible takeover of the struggling Cairns Holdings which was previously majority-owned by the Reserve Bank of Zimbabwe (RBZ).
Dairibord must however see off competition from private local investment group Judah Holdings Limited along with South African firms, Vasari Global and Eastern Trading.
Leading shareholders and creditors of this week approved a scheme of arrangement to bring in new investors proposed by judicial manager, Reggie Saruchera.
Cairns s was put under judicial management in November last year after facing liquidity and working capital challenges, which the new investor is expected to help address.
The company owes various creditors about US$11 million.
However operations have been improving steadily under judicial management with turnover increasing to US$1,4 million in May from US$400,000 in December last year.
Half the company’s workers had also been put on unpaid leave as the problems mounted but about 75 percent of the overall staff complement is now back at work.Advertisement