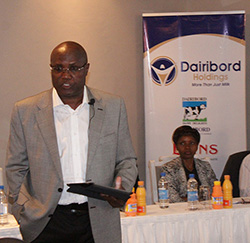 FOOD processing group Dairibord Holdings has reported an operating profit of $1, 4 million for the full-year to December from a loss of $ 1, 8 million in the previous year on improved sales and production efficiencies.
Revenue was flat at $99 million despite an 8 percent increase in sales.
Presenting the company’s year-end results on Wednesday group chief executive Anthony Mandiwanza said the rationalization process undertaken by the group in 2013 was beginning to bear fruit.
“The results you are seeing are because of the wise decision we took to rationalize our operations. Going forward we will leverage on investments made in 2014 to support both the domestic and export market,” said Mandiwanza.
“We expect volumes to increase by a further 8 percent to grow our profit margin in the region of 4 percent.”
During the year, the group had capital expenditure of $ 9, 9 million, most of it on rehabilitation of its plant in Chipinge which is expected to be complete next month.
Mandiwanza said the group’s first quarter performance was trending in the right direction without giving figures.
On the local market, Dairibord enjoys a market share of 40 percent.
The group’s Malawi unit posted a $351,000 loss, which Mandiwanza said was driven by erratic supply of utilities and high production costs.Advertisement