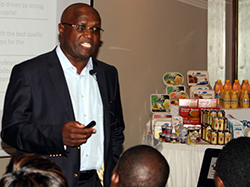 ZIMBABWE’S largest dairy processor Dairibord Holdings has reported a six percent rise in revenue for the first four months of 2015 on the back of improved sales and forays into regional markets.
Dairibord currently enjoys a 40 percent market share on the local market ahead of Dendairy and Alpha and Omega Dairy.
Volumes sold during the period were 22 percent up on the same period last year, marginally driving operating profit up by one percent.
Group chief executive Anthony Mandiwanza told shareholders on Thursday at the company’s 20th annual general meeting that there was need to deal with the cost structure after total costs rose 3 percent in the period under review.
The group’s Malawi unit, which posted a $351,000 loss last year on the back of erratic supply of utilities and high production costs, had recorded an improved performance during the quarter.
“We have now turned round the corner and it is trending in the right direction. We believe that recovery will continue in the second quarter,” said Mandiwanza.
The group is now selling its products in Mozambique and Zambia and expects exports to contribute five percent to the half-year turnover.
“We are happy with our exports into Zambia. We have strong, solid and consistent flows of various products into that country,” said Mandiwanza.
“Our tea, maheu and milk are also making inroads into Mozambique.”
Dairibord owns 100 percent of Lyons Zimbabwe, which packages and retails tea, among other food and beverage products.
On the local market Mandiwanza said growth of the informal sector had affected retail outlets which are the group’s major distribution points.Advertisement