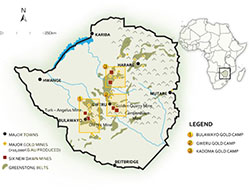 THE closure of Dalny mine four months ago saw New Dawn Mining’s gold production for the quarter ended September 30 declining by 13,4 percent from 10 256 ounces to 8 884 ounces.
According to the company’s third quarter results, gold production decreased 11 percent compared to the previous quarter ended June 30, 2013 of 9 986oz.
The group’s consolidated gold sales for the quarter declined 26,2 percent to US$12,16 million as compared to US$16,48 million for the quarter.
“Revenue was adversely impacted by the closure of Dalny Mine effective August 30, 2013, as well as the continuing decline in the price of gold during the quarter,” the company said.
“The average revenue per ounce of gold sold also decreased by 6,1 percent to US$1,313 per ounce, compared to US$1,399 per ounce for the preceding quarter ended June 30, 2013.”
In August New Dawn placed Dalny Mine on care and maintenance with the 900 staff sent home on unpaid leave following a dip in gold prices as well as the impact of power supply problems and the country’s indigenisation programme.
The Canada-listed company said Dalny would remain under care and maintenance until the company manages to “satisfactorily address the financial and operational issues that contributed to its shutdown or until a potential sale, joint venture or some other arrangement is realised”.
“The substantial fall in the price of gold over the last nine months, exacerbated by the impact of previously reported operational problems at the mine, has resulted in a serious liquidity problem,” the company said when announcing the shut-down.
“As a result, the amounts owing to the Zimbabwe Electricity Supply Authority (ZESA) in respect of the Dalny Mine operations were not being paid on a basis acceptable to ZESA, thus causing ZESA to issue a Notice of Disconnection of electrical services to the mine.
“Without electrical power, the Company cannot operate the mine and was thus forced to shut-down the Dalny Mine operations.”
As part of its near-term operating strategy, the company has also initiated a program to sell some of its mining assets that are not considered integral to its long-term strategy.
The group would also continue efforts to raise additional capital under acceptable terms and conditions through financing via debt and/or equity issuances.Advertisement